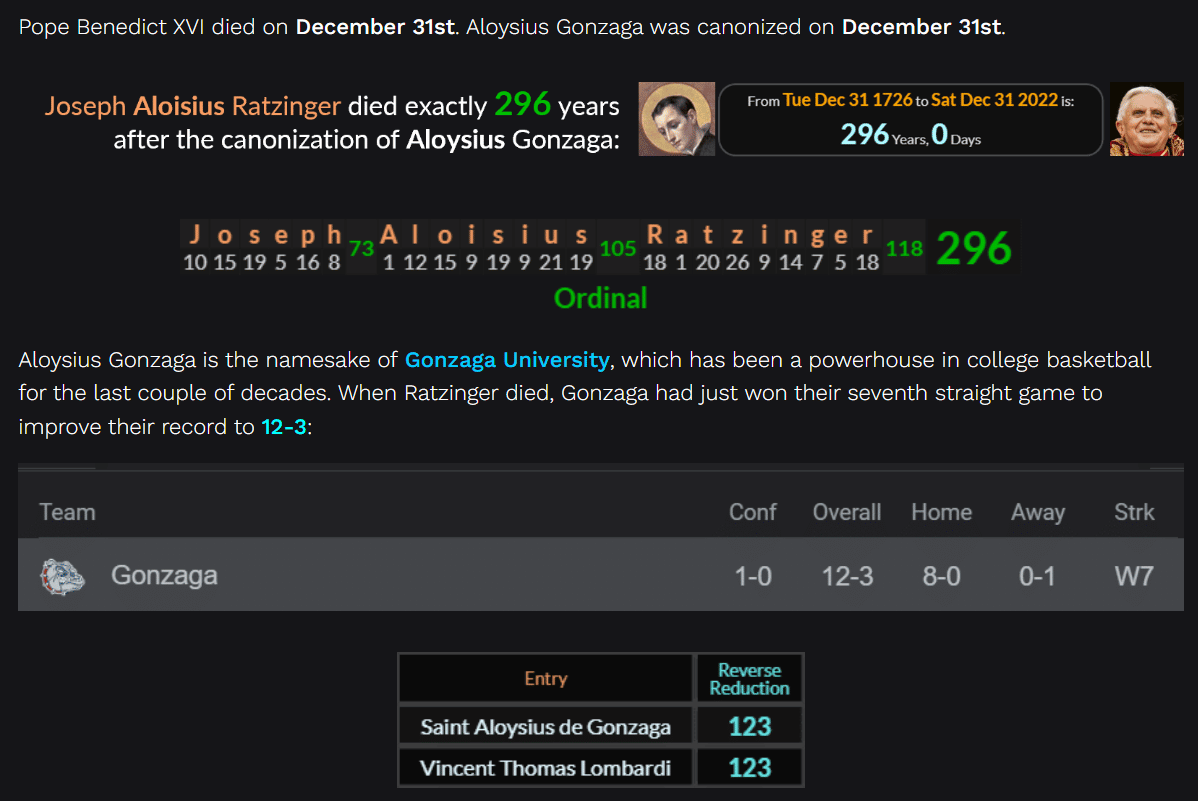 This is the same name, with a slightly different spelling, as Aloysius Gonzaga, a 16th-century aristocrat who was canonized as a Saint in the Catholic church during the 18th century: 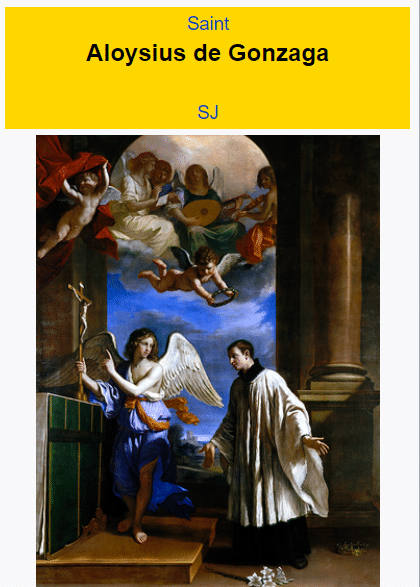 Pope Benedict XVI was replaced by Pope Francis, the first Jesuit to become pope. Gonzaga became a Jesuit before he allegedly died from a plague at age 23.

The United States was founded in 1776. The American Flag is called the Star-Spangled Banner, which is the name of our national anthem.

Aloysius Gonzaga is the namesake of Gonzaga University, which has been a powerhouse in college basketball for the last couple of decades. When Ratzinger died, Gonzaga had just won their seventh straight game to improve their record to 12-3:

This is also the Reverse value of the new King of the United Kingdom, Charles.

A day before his death, I made this post explaining the “Immaculate Conception” riddle that’s tied to this year’s Super Bowl. The Immaculate Conception the Blessed Virgin Mary was free from original sin. Mary’s spouse and Jesus’ father was named Joseph, just like Benedict XVI.

Ratzinger died on the first date with numerology of 85 in three decades:

A day after Benedict’s death, a massive “Jesus” ritual broke out between the Packers and Vikings in Green Bay, Wisconsin.

The last name Ratzinger is a Supermatch with Wisconsin.

The Vikings’ home in Minnesota was the 32nd state added to the Union. The Vikings returned the game’s opening kickoff to the 32 yard-line. There are 32 teams in the NFL.

Benedict XVI took over for Pope John Paul II, who was born during Lunation -32. This New Moon also marked a Solar eclipse from Saros # 146:

The ultimate eclipse number is 1331. This is the Latin value of Jesus the Messiah.

The Packers were founded in 1919. Notice how Solar eclipse has matching gematria with the stadium of the game, Lambeau Field.

Minnesota trailed by a whopping 3-34 deficit before scoring in garbage time:

Recall how this number was mentioned in my post on the “Immaculate Conception” riddle.

ONE World Trade Center replaced the Twin Towers, which were destroyed on 9/11. This year’s Packer season is littered with tributes to 9/11, which many historians believe is the true birthday of Jesus Christ.

The Sun is an average of approximately 93 million miles from Earth. It’s believed that Jesus was crucified on the 93rd day of the year from 9 a.m. to 3 p.m.

The nation’s establishment is celebrated on Independence Day, written 7/4 or 4/7.

All Roads to Rome

The birth name of John Paul II was Karol Józef Wojtyła. Despite looking like the letter L, the character “ł” does not seem to translate directly to an English character. This means his name has Ordinal gematria of 213.

In 2013, Pope Francis led a ceremony canonizing Jesuit founder Peter Faber. Faber’s last name can be translated to either LaFevre or Favre. Think about how this connects to Matt LaFleur and Brett Favre. That was the year Rodgers and the Packers played Dodgeball in a big tribute to the 2004 film Dodgeball: A True Underdog Story. After a 4-8 start, the 2022 Packers are indeed A True Underdog Story.

The Catholic Church traces its roots back to Ancient Rome, which was founded in 753 B.C. Rodgers was born during Lunation 753: