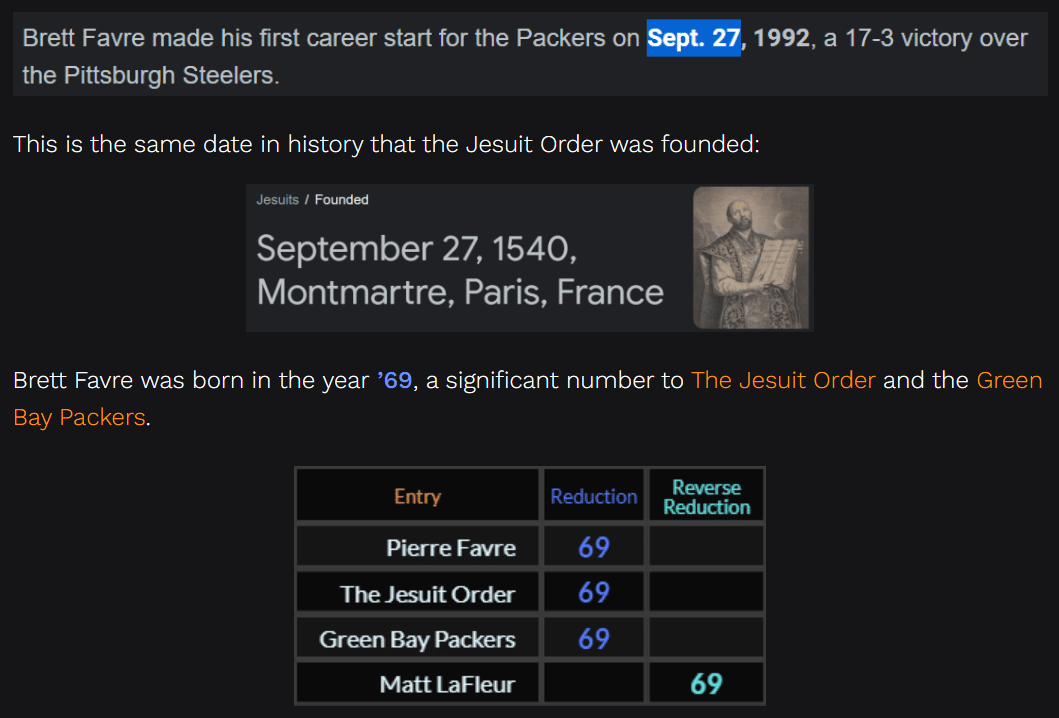 One of the primary founders of the Society of Jesus was Peter Faber. This is, however, an anglicized version of his name. Faber was born in the French Alps, and in the French language, his name translates to Pierre Lefevre:

Lefevre has also been translated as Favre. This post will examine the connections of Peter Faber’s canonization as a Saint in the Catholic Church to the film Dodgeball, whose main character is named Peter LaFleur, and the Green Bay Packers, who for 16 seasons were led by Brett Favre, who broke virtually every major NFL record for quarterbacks during his career.

Brett Favre was traded to the Green Bay Packers before the 1992 season. In the third game of the season, starting quarterback Don Majkowski went down with an injury, and Favre would go on to start every single game for the Packers until 2008. His first start fell on the date September 27th:

This is the same date in history that the Jesuit Order was founded:

Brett Favre was born in the year ’69, a significant number to The Jesuit Order and the Green Bay Packers. 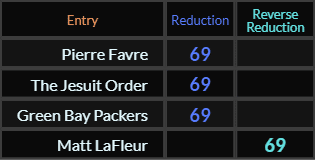 Faber, a founder of the Jesuit Order, was canonized the same year the first Jesuit Pope took power. The team of protagonists in Dodgeball is called Average Joe’s Gym. In 2008, Brett Favre was replaced by Aaron Rodgers at quarterback. In 2019, the Packers hired a new head coach named Matt LaFleur.

Pope Francis chose a special date to honor his Jesuit brethren – his own birthday.

The year of Francis’s election and subsequent canonization of Peter Faber occurred in the year 2013.

His Death fell on the 213th day of the year:

The inverse of 213 is 312. This is the Ordinal value of Dodgeball: A True Underdog Story, and is also found in the Reverse column for Aaron Rodgers‘ and Pope Francis‘s full names.

Aaron Rodgers’ Saturn return was in 2013

Dodgeball unexplainably takes place in the year ’93. At the very least, there are very solid references to that year in the film. This stands out because ’93 is the first year The Green Bay Packers made it back to the NFL playoffs with Brett Favre at the helm.

In 2017, Aaron Rodgers missed another significant chunk of time after he broke his other collarbone.

Rodgers’ chief rival, the Bears, have Latin gematria of 178.

During the summer of 2013, the same year we got a new Pope and a new Saint, the Packers held a “team-building activity” that included playing Dodgeball. It looks like Aaron Rodgers may have taken the game more seriously than some of his recent playoff appearances: 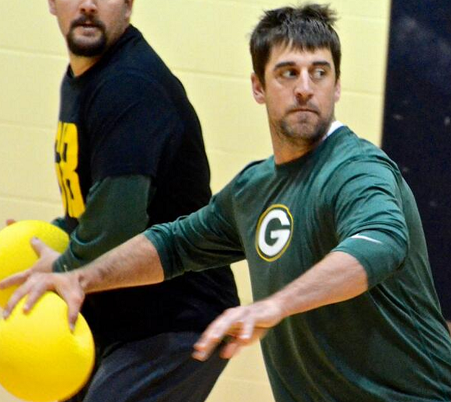 The main character of Dodgeball is played by Vince Vaughn. His coach Patches O’Houlihan teaches him the five D’s of success – Dodge, Duck, Dip, Dive, and Dodge.

This is a wildly-significant number to not only Aaron Rodgers, but The Jesuit Order, its founders, and the Pope’s real name.

The Jesuit Order was founded in 1540

Faber was enshrined into the Catholic Church’s history on a date with Primary numerology of 62 and 35:

Earlier that football season, Aaron Rodgers broke his right collarbone against the Chicago Bears on Monday Night Football. The date was November 4th, or 11/4.

Favre Breaks Out vs. Cincinnati

Brett Favre had his first breakout game against the Cincinnati Bengals. Note the matching 2030 gematria with Dodgeball’s main character, Vince Vaughn. (Favre’s father passed away in 2003)

Favre’s first big game against the Cincinnati Bengals was on September 20th, or 9/20/92, which had Standard numerology of 121:

The Synagogue of Satan are the false Jews who rule the world in end times according to the Book of Revelation, which reveals the number of the Beast to be 666.

Favre and the Packers won Super Bowl XXXI in his 87th career start.

Dodgeball: A True Underdog Story hit theaters on June 18th, which is typically the 169th day of the year:

Quarterback Brett Favre was born on a date with a Life Lesson number of 45: