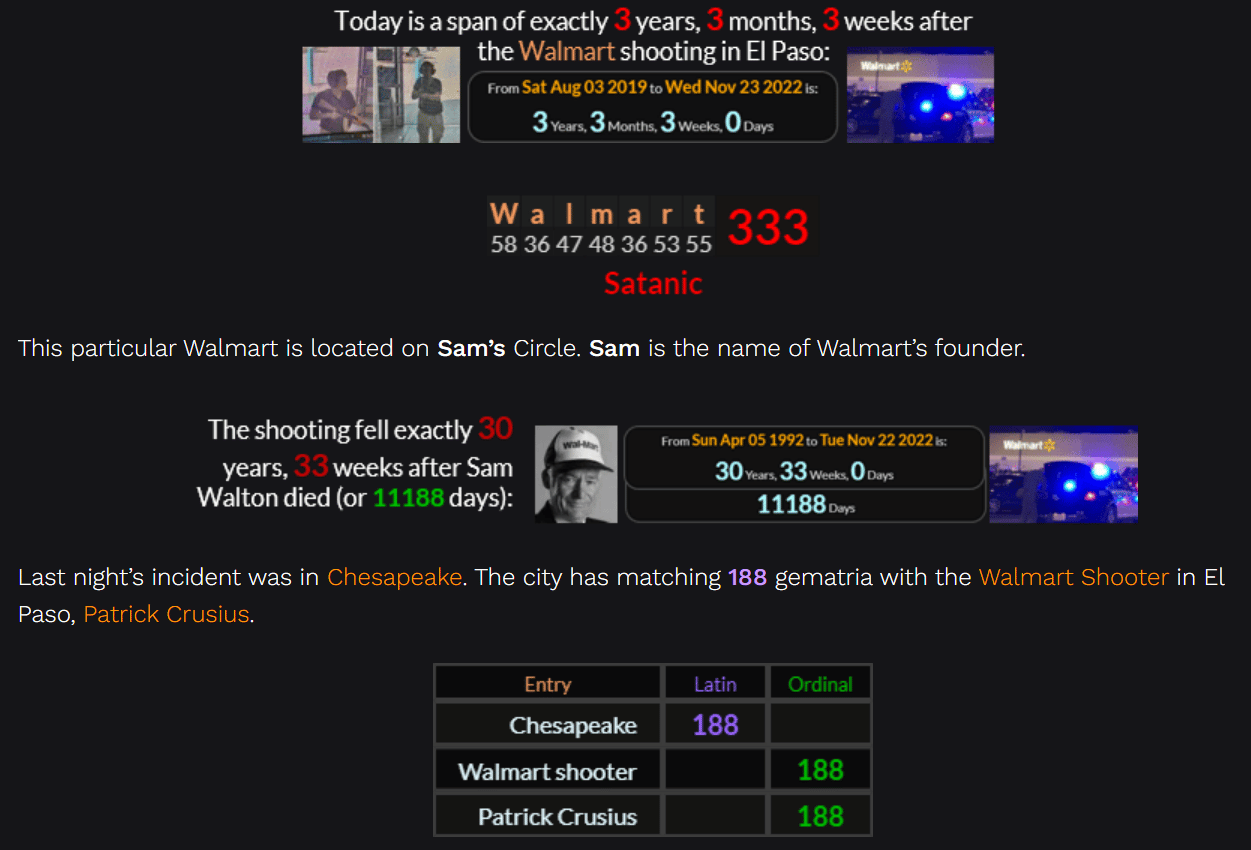 Ever wonder why mass shootings at public businesses only ever seem to occur at big corporate national chains, and never some local mom-and-pop store?

This particular Walmart is located on Sam’s Circle. Sam is the name of Walmart’s founder.

Last night’s shooting was on the anniversary of the JFK assassination.

Last night’s incident was in Chesapeake. The city has matching 188 gematria with the Walmart Shooter in El Paso, Patrick Crusius.

UPDATE: The shooter’s name has been revealed to be Andre Bing.

Initial reports of the shooting from El Paso had claimed 20 dead, 26 injured. The city has Extended gematria that syncs up extremely well with Chesapeake’s mayor, Rick West.

The actual date of the shooting had a Life Lesson number of 39 and also left 39 days on the calendar:

The address for this Walmart is 1521: 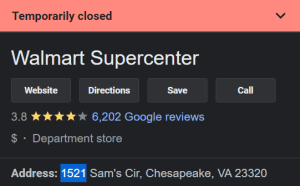 Last night’s shooting fell on the anniversary of the assassination of President John F. Kennedy.

It was exactly 59 years after John F. Kennedy (a.k.a. Jack Kennedy) was shot, and was a span of 5 years, 9 days after the mayor of Chesapeake took office:

Walmart was founded a span of 509 days before JFK was killed:

Kennedy was elected in the year 1960. This syncs up with the gematria of both the mayor’s name and the city he governs.

JFK was born on May 29th and died on November 22nd:

Notice the remarkable length of these eclipses. The total eclipse from May was the longest one in over 500 years. The annular eclipse was the longest in nearly three full centuries.

1919 is the gematria of Patrick Wood Crusius, the full name of the El Paso Walmart shooter.

In my post on the ultimate Eclipse number, I point out why the number 1919 is so important to eclipses, as it is part of the 1331 Eclipse code.

Eclipses are often separated by exactly 19 years, the length of a Metonic cycle. This was a number coded into Walmart Shooter Patrick Crusius from the year ’19.

The 19th card in a Tarot deck is The Sun.

The word Sun has matching 54 gematria with JFK and Chesapeake mayor Rick West.

377 is a Fibonacci number