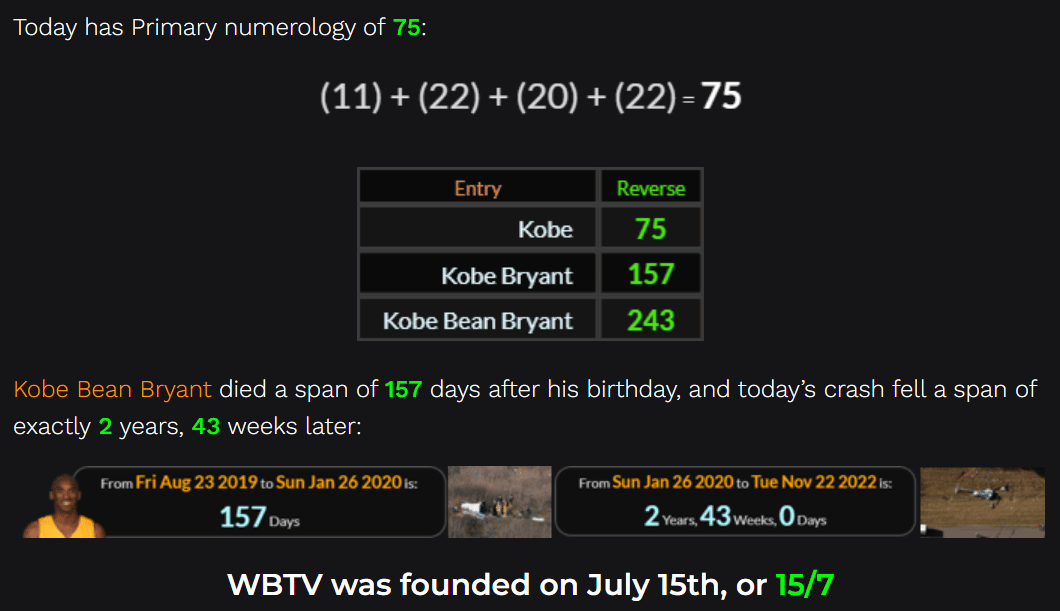 A big Crash that killed Meteorologist Jason Myers on the 22nd day of the month in 2022?

Recall all the remarkable synchronicities involving car crashes between myself and other decoders on the 22nd of September.

This crash has overwhelming numerical alignments with the death of Kobe Bryant, which I did a lot of work on. Kobe wore two numbers during his career – 24 and 8. This matches the Ordinal value of the two victims in this crash, Jason Myers and Chip Tayag:

This crash was in Charlotte. Prior to his storied career with the Lakers, Kobe was actually drafted by the Charlotte Hornets.

Kobe was born in Philadelphia, where he attended high school. The day after this crash, the Charlotte Hornets defeated the Philadelphia 76ers, who scored 101 points:

Today has Primary numerology of 75:

Kobe Bean Bryant died a span of 157 days after his birthday, and today’s crash fell a span of exactly 2 years, 43 weeks later:

Kobe Bryant was born on the 235th day of the year, which leaves 130 days on the calendar:

The crash was 130 days after WBTV‘s last anniversary, and 235 days before its next:

Kobe was born 39 days after WBTV’s last anniversary, and 326 days before its next:

Today’s crash was on the 326th day of the year, which leaves 39 days in the year:

November 22nd also had a Life Lesson number of 39:

WBTV was founded on the 196th day of the year:

WBTV is channel 23 in Charlotte

Kobe had Primary birth numerology of 128, matching the gematria of Charlotte, North Carolina in that same method:

Helicopters are sometimes called helis, or a HELI. During the crucifixion, Jesus yells for ELI (my God), which is the number 173 turned upside-down:

The more well-known of the two who perished was a Meteorologist named Jason Myers.

It happened on the same date John F. Kennedy was Assassinated.

Kobe died in Calabasas on a date with Primary numerology of 67:

1919 is a number of focus in my post on the ultimate eclipse number.

It was on the same date as the 33rd Royal Rumble.

Super Bowl 54 was 895 days after that same eclipse.