Last week, I made this post right after learning about a fatal car accident that occurred in my family. Details were scarce at the time, so I was very limited in my ability to find any intriguing numerical alignments for the date, outside of the fact that the vehicle they were T-boned by was a Dump truck, which lined up perfectly with the date.

It turns out that it happened in the town of Jackson.

Imagine my stunned reaction when I saw that on Monday, Zach Hubbard, whom I met earlier this month in what itself was an alarming synchronicity, posted a video on his channel about the “Organic” side of gematria because a friend of his he met during his trip AND his own father both got in car accidents on the exact same day – September 22nd. Watch his stream at this link. To compound this, I first learned about Zach’s syncs while I was visiting with my uncle yesterday.

That’s strange enough as it is. But consider the fact that back in April, I made this post and this video on the death of NFL quarterback Dwayne Haskins, who was struck by a Dump truck while walking on the interstate. It was later determined that Haskins was under the influence of multiple substances at the time of his death.

So – is it possible that the death of this athlete in Florida, a man no one in my family had ever met, was connected to the death of my uncle’s girlfriend? Strap in. 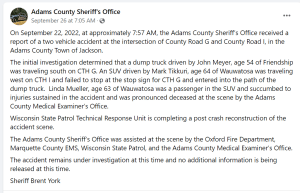 The odds that two random names would have the same gematria in 3 of 4 base methods is just a fraction of one percent.

Notice the 54 in Reduction. The driver of the dump truck is 54 years old. This is the value of Tikkuri in Reverse.

Note how the number Forty-nine has gematria of 54.

The crash that Zach’s friend had in New York was the first of his entire life, and he is 49 years old.

I have a lot of love for all my uncles on both sides of my family, but if I had to pick, Mark would be my favorite. We have a lot of similar personality traits, also being very focused on work, no interest in having kids, etc. Remarkably, his common and full names both match mine in gematria.

Note the 142 in particular. In April, Dwayne Haskins was killed in the city of Fort Lauderdale, just outside the airport.

In my original post on Haskins, I have an entire section on the number 124. Dwayne was born on a date with Primary numerology of 124, on May 3rd, which is the 124th day of the year in leap years:

His nickname was “Simba”, revealing a connection to The Lion King, and he died in Florida.

Although my uncle’s legal name is Mark, I don’t know anyone who calls him that. My whole life, he’s always been Uncle Gus. He’s lived in Wauwatosa ever since I was a little kid.

Gus has some big ties to Florida. His second wife Lynn, whose name is very similar to Linda, moved to Florida in the 90’s. His step-daughter from that marriage (who is actually somewhat of a celebrity) also lives in Florida.

On top of that, his third wife’s name is Mickey. In my last Super Stream, I covered the numerology of a funnel cloud that appeared at Florida’s Disney World, whose mascot is Mickey Mouse.

After all this, my jaw didn’t actually hit the floor until I looked up the site of the crash on Google Maps. To the immediate east of the intersection of Highways G and I sits a tiny one-strip airport called Clearwater Ranch Airport: 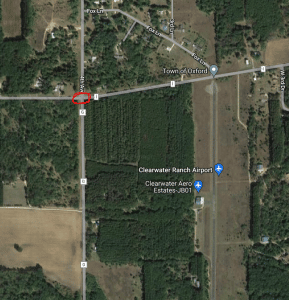 Clearwater Airport, in Wisconsin? Why?! Clearwater is a city in Florida.

I did not know until just now that Clearwater is home to the Church of Scientology. The church has matching Ordinal gematria with Linda’s full name.

She was born on a date with Primary numerology of 100 and left us on the date leaving 100 days in the year:

Check out all of the overlap Scientology has with all of the people involved in this story. Linda was 63 years old.