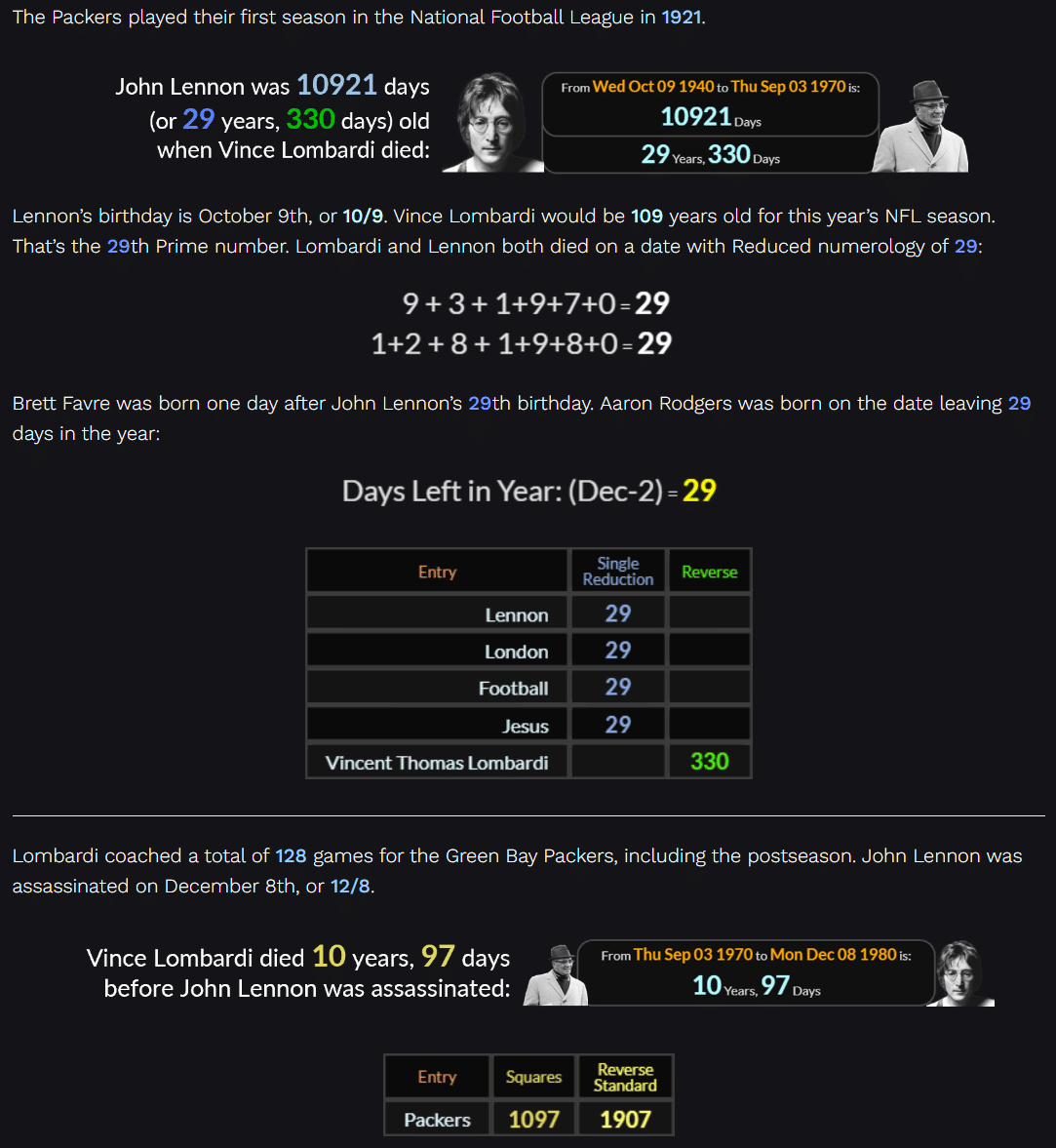 This post will examine how the deaths of Vince Lombardi and John Lennon are connected by the numbers, a fact made highly-evident in this year’s NFL season.

The last names Lombardi and Lennon both sum to 74 in the alphabetic order.

This is a primary number coded into the Killing of Jesus.

The date written 7/4 in the United States is “Independence Day” = 74, our national “Holiday” = 74. John Lennon was killed in New York City, which rests on the 74th meridian.

666 is the sum of the Magic Square of the Sun. Jesus is the Son of God.

Packers vs. Giants in London

Aaron Rodgers was born in ’83. John Lennon was born on the date leaving 83 days in the year:

Vince Lombardi was a pro Football coach. The sports of American football and English football both have 22 men on the field. “FIFA” = 22 and the ’22 World Cup was the 22nd of all-time. Messi kicked the first goal of the Final with 22:22 on the clock, and regulation ended in a 2-2 draw.

He was born during Brown Lunation # 220:

In that ’22 season, the Green Bay Packers became the 32nd and final National Football League team to play a game in London, England. Their opponent was New York, which is the city Lennon was killed in. The game took place on what would have been the 82nd birthday of John Winston Lennon:

Rodgers entered and left that game with 142 career victories.

The Packers played their first season in the National Football League in 1921.

Lennon’s birthday is October 9th, or 10/9. Vince Lombardi would be 109 years old for this year’s NFL season. That’s the 29th Prime number. Lombardi and Lennon both died on a date with Reduced numerology of 29:

Brett Favre was born one day after John Lennon’s 29th birthday. Aaron Rodgers was born on the date leaving 29 days in the year: 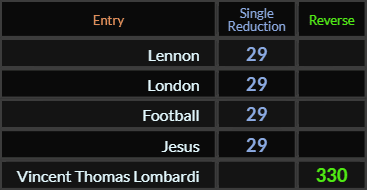 Lombardi’s death was connected to Solar Saros 116. Eclipses from that Saros happen exactly halfway between each Lunar Eclipse from Lunar Saros 109.

Lombardi coached a total of 128 games for the Packers, including the postseason. John Lennon was assassinated on December 8th, or 12/8.

Vince died on the date leaving 119 days in the year:

Lennon’s death fell on a date with Primary numerology of 119:

Lennon was killed during the New Moon for Brown Lunation # 717:

Vince would go on to die on the 246th day of the year:

The Packers were founded on August 11th, the 223rd day of the year: