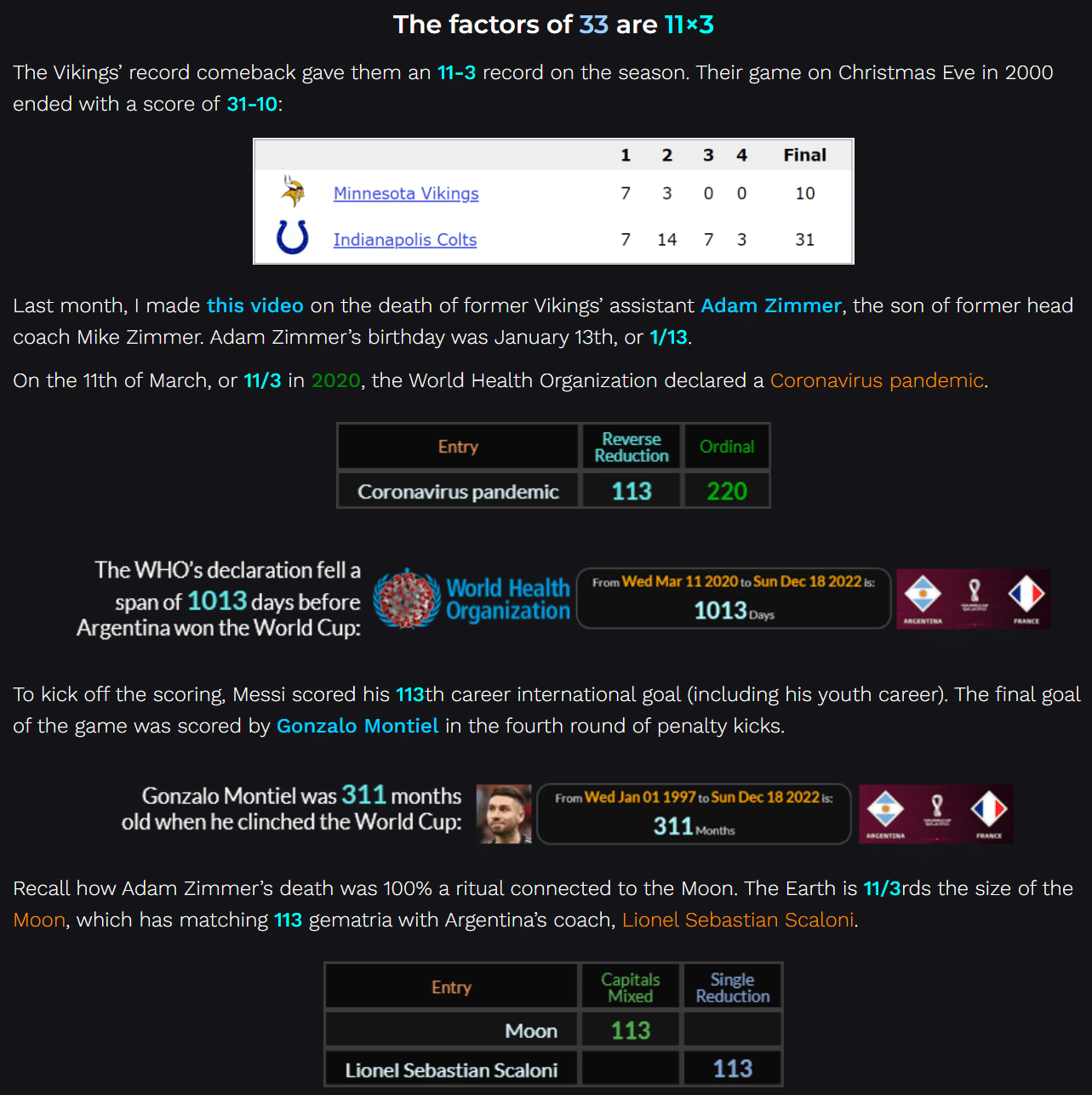 In my last livestream from this past Friday, I discussed this post about a car crash in Florida that seemed to be a potentially-organic tribute to the numerology of Zachary K. Hubbard.

Understandably, Zach wasn’t terribly thrilled, and discussed this in a livestream last night. I bring this up because he called me to have a discussion about my work and what I’ve been saying. Find the stream with the conversation by clicking here.

Maybe in a perfect world I would have approached this video in a slightly different manner. But I 100% stand by what I said in regards to the numerology I uncovered in this story being significant, and what happened AFTER my video only goes to prove this further.

In September, Zach and I met in person for the first time. Two weeks later, we both had remarkable synchronicities with “car crashes” on September 22nd. The linked post explains how my uncle’s fatal car accident with a dump truck in Wisconsin was connected to the state of Florida, where Dwayne Haskins was hit and killed by a dump truck earlier this year.

Florida, which is where a bizarre news story connected to Zach Hubbard took place on his 33rd birthday, is the same state where a cooking oil truck crashed this past week. I found this to be intriguing, given that some people were labeling Zach a Snake oil salesman.

In my other post on the World Cup Final, I explain how it was all a riddle connected to the big gray disk on the sky, the Moon. This shares 170 gematria with Zach’s full name.

The winning World Cup team received $42 million dollars, and the runners-up got $30 million. The number 423 links The Moon to its equatorial diameter of 2160 miles.

In December of 2015, Zach made this blog post explaining why the Denver Broncos would defeat the Carolina Panthers in Super Bowl 50, which was held in 2016. I recall him discussing this even earlier. Not only did he call the teams and the result, but he even went so far as to explain why there would be a “Black Panther” ritual at halftime, which manifested during Beyonce’s musical performance.

This took anyone on the fence about whether or not the NFL was rigged and pulled them right off. It was very clear now, and heads were turned.

A day after the Super Bowl, Zach made this post about the next year’s Super Bowl, pointing out that ESPN picked the Indianapolis Colts and Minnesota Vikings to play in the game. As the season went on, this riddle got increased focus, particularly due to the death of former Vikings head coach Dennis Green. This was further amplified by the 322nd episode of Pawn Stars, which was called “Colts and Vikings”.

People were looking to get ahead of the sportsbooks, so this speculation resulted in a lot of people putting a disproportionate amount of money down on these teams, particularly the Colts, who were led by Andrew Luck, a legitimate threat to win the Super Bowl.

However, it was not meant to be. On December 24th, 2016, the Vikings and Colts both lost their Week 16 game, which eliminated both teams from playoff contention:

And thus, the dreams of newly-awake fans of numerology came crashing down. But that wasn’t the only crash on that date – on that same exact day, Christmas Eve of 2016, Zach Hubbard’s garage was struck by a drunk driver who left the road while he was out of town visiting family.

This was all very alarming, to say the least. This crash happened less than two weeks after I first showed my Excel version of the Gematrinator on his YouTube channel. Would my house be next?! Unfazed, I continued on my journey for truth.

Notice how both the Vikings and Colts were eliminated while scoring 25 points. That’s a pretty uncommon score to have in a game of American football. According to this website, a team finishes with 25 points about 1% of the time. Is it worth noting that Zach is currently on Gematria Effect News 25?

Why is this so interesting? That year’s Super Bowl ended up being completely coded up-and-down with the number 25. The game was played on 2/5, it was the same year the touchback was changed to the 25 yard-line…it was Tom Brady’s 25th playoff win and the AFC’s 25th Super Bowl win.

But undoubtedly, the biggest 25 in that game is that the Patriots came back from a 25-point deficit to defeat the Atlanta Falcons in the biggest Super Bowl comeback ever. It was also the first Super Bowl to ever go to Overtime.

The Vikings and Colts are in different conferences, so the schedule only requires them to play once every four seasons. In the year 2000, the Vikings played the Colts on Christmas Eve, the same date as the crash into Zach’s house exactly 16 years earlier. Recall the number 216 above and how it connects Zach to the Moon.

Just six days before the 2016 crash, the same date both teams would be eliminated, the Vikings played against the Colts on December 18th. In that game, the Colts jumped out to an unexpected 27-0 lead at halftime, which they rode to a comfortable win:

The next time December 18th fell on a Sunday was this year, 2022 – the same date as the World Cup Final. However, instead of playing on Sunday, the Vikings and Colts played one day earlier, December 17th, which was a Saturday. The head coach of the Colts is named Jeff Saturday. This matchup would not have occurred had the NFL not expanded its schedule to 17 games last year.

During the game, the underdog Colts jumped out to an unexpected whopping 33-0 lead at halftime:

This time, the Vikings miraculously came back to win this game, breaking a nearly-30 year-old record that was held by the Buffalo Bills. This is pretty wild because earlier this year, I made this post about a huge comeback the Vikings made against the Buffalo Bills – another team they play only once every four years.

In their playoff comeback against the Oilers, the Bills were led by backup quarterback Frank Reich – the same man that Jeff Saturday replaced as the Colts’ head coach. The Bill’s huge comeback was completed in overtime, as was the Vikings. The World Cup Final went into overtime the following day, but even that wasn’t enough, as the game finished in penalty kicks.

In the final week of the 2016 season, after the Vikings and Colts were both eliminated, each team won to finish the year 8-8 against a 3-13 team:

Francis became the new pope on the date 3/13/13. This year’s incredible Vikings-Colts game, and the following day’s World Cup Final, both fell exactly 313 weeks after their 2016 matchup:

So the new record for a comeback in the NFL is 33 points. On Zach’s 33rd birthday, the mainstream media published a news story that seemed to be a riddle connected to him.

These are numbers connected to False flag. The 156th Prime number is 911, like 9/11, the date of the biggest false flag attack in U.S. history.

The Minnesota Vikings were just one win away from playing in Super Bowl 33. At the time, they were coached by Dennis Green.

Last month, I made this video on the death of former Vikings’ assistant Adam Zimmer, the son of former head coach Mike Zimmer. Adam Zimmer’s birthday was January 13th, or 1/13.

On the 11th of March, or 11/3 in 2020, the World Health Organization declared a Coronavirus pandemic.

To kick off the scoring, Messi scored his 113th career international goal (including his youth career). The final goal of the game was scored by Gonzalo Montiel in the fourth round of penalty kicks.

Recall how Adam Zimmer’s death was 100% a ritual connected to the Moon. The Earth is 11/3rds the size of the Moon, which has matching 113 gematria with Argentina’s coach, Lionel Sebastian Scaloni.

It takes ~29.5 days for the Moon to complete a lunar phase.