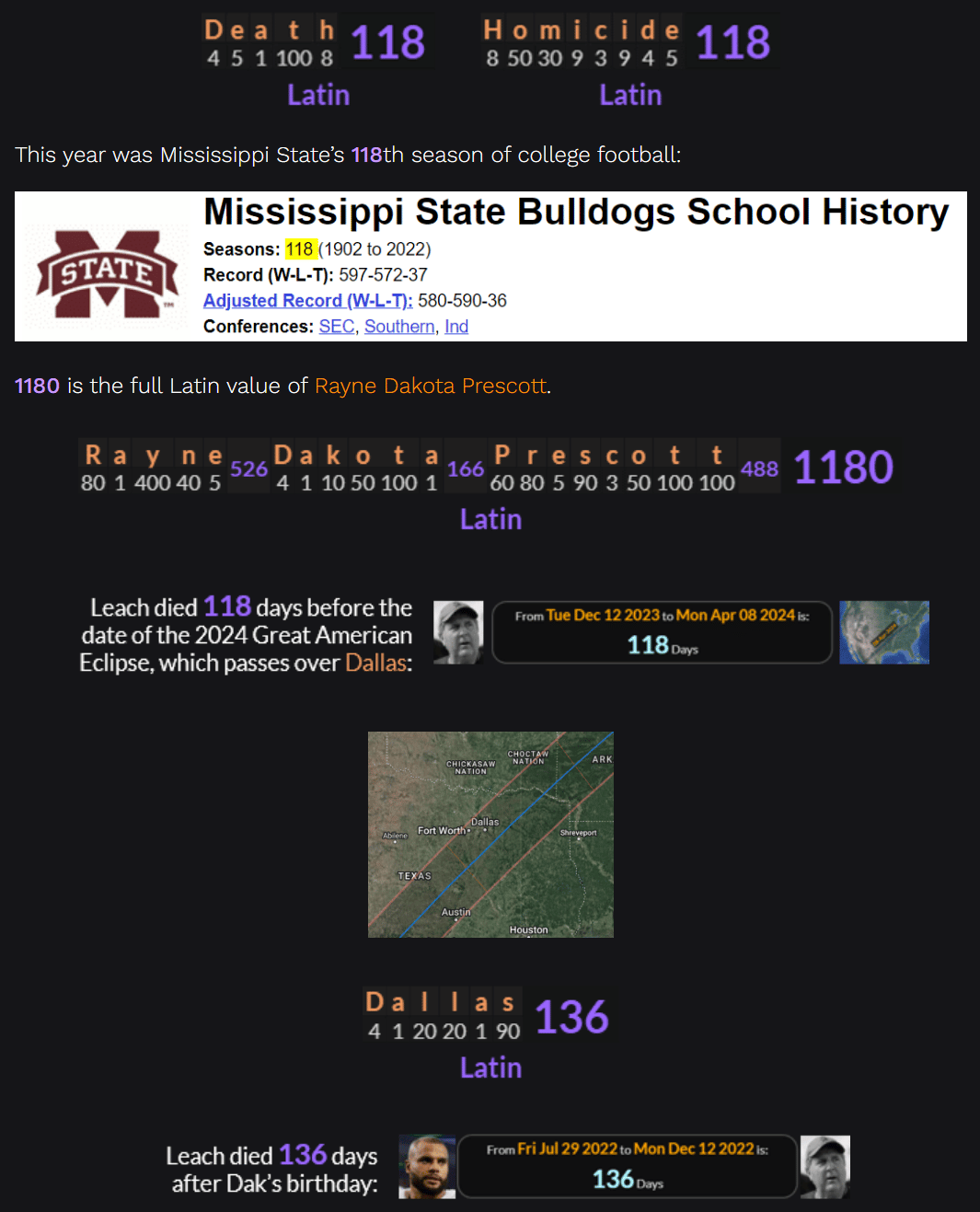 This story about Mississippi State head coach Michael Charles Leach fell a few weeks before the end of 2022.

On that same date, December 11th, space nerds around the globe celebrated the successful return of the Orion capsule, which was part of NASA’s Artemis I mission to the Moon:

Leach had just finished coaching the Mississippi State Bulldogs’ football season when he fell ill and subsequently passed away. Mississippi State produced an elite NFL quarterback several years ago, when they sent current Cowboys quarterback Dak Prescott, who has Primary birth numerology of 148, to the 2016 NFL Draft:

A highly-significant number of Ritual human sacrifice is Thirty-three.

The Cowboys are one of just a few teams with Reduction gematria of 33. Lunar and Eclipse both sum to 33, relevant because it takes 33 years for the twelve-month lunar calendar to fall back in sync with the solar calendar.

The Jesuits, who use an eclipsed Sun as their emblem, were founded just three days before a solar eclipse from Saros series 136, which began just as the date 13/6/1360 was ending.

Today is not only the 13th of the month, but it also has Reduced numerology of 13, and is also the 347th day of the year:

In 2024, the city of Dallas will find itself directly in the path of a Total solar eclipse: 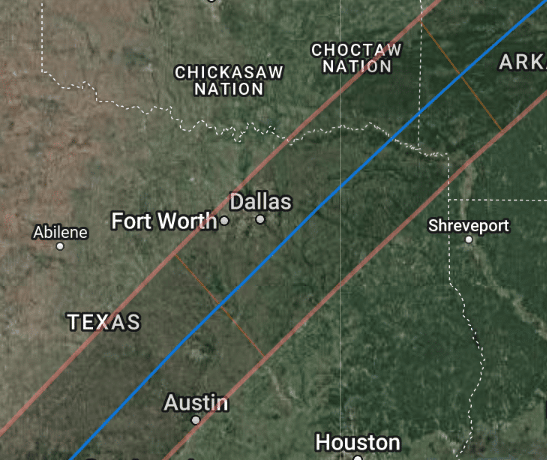 That 2024 solar eclipse over Dallas is the second of two “Great American Eclipses”. The exact halfway point of those eclipses, which ended Lunation 1211 and began Lunation 1212, was 1211 days from each eclipse. The first multiple of 1211 is 2422.

Recall how this weekend was the anniversary of the Mayfield tornado in the early hours of 12/11. Mayfield sits just south of the intersection of those two eclipses: 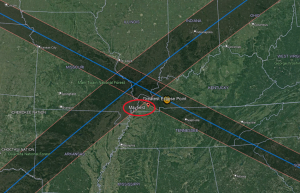 The day after the Mayfield tornado, Mayfield’s Browns defeated the Ravens 24-22:

Two weeks later, Mayfield and the Browns lost by a score of 24-22 against the Packers on Christmas day.

The phrase Solar eclipse has Latin gematria of 433.

“The Moon” = 27. It takes approximately 27 days for the Moon to orbit the Earth in relation to the stars. This is called a lunar orbit, or sidereal month.

The Great American Eclipses intersect in Illinois. Mississippi State will play against Illinois in the ReliaQuest Bowl, held at Raymond James Stadium.

In the alphabetic order, the words Eclipse and Circles both sum to 69. On the Zodiac, the only sign ruled by the Moon is Cancer, whose symbol is a sideways 69. Recall how the Moon landing occurred on the final day of Cancer in the year ’69.

Dak Prescott went to college at Mississippi State, and now plays NFL football in Texas. The last team he played against was the Houston Texans.

The first three digits of Pi are 3.14. Dak played for the Mississippi State Bulldogs before his career in Dallas.

From our perspective here on Earth, The Moon is a circular disk. As such, it is connected up-and-down to the number 666. NASA conducted its first Fake Moon landing via the Apollo spacecraft.

The next total lunar eclipse occurs on Pi Day, March 14th, or 3/14. Leach was in good enough health to spend practices with the team, all the way up through Saturday, December 10th, just one day before he collapsed at home.

The Artemis I mission is preparing NASA to make another Moon landing. In 2017, we lost rock stars Chris Cornell and Chester Bennington. Cornell was born on July 20th, the date of the first Moon landing, while Chester died on July 20th.

This year was Mississippi State’s 118th season of college football:

1180 is the full Latin value of Rayne Dakota Prescott.

In Ordinal and Reduction, the phrase Ritual sacrifice connects to 73.

Leach is credited with pioneering the Air raid offense.