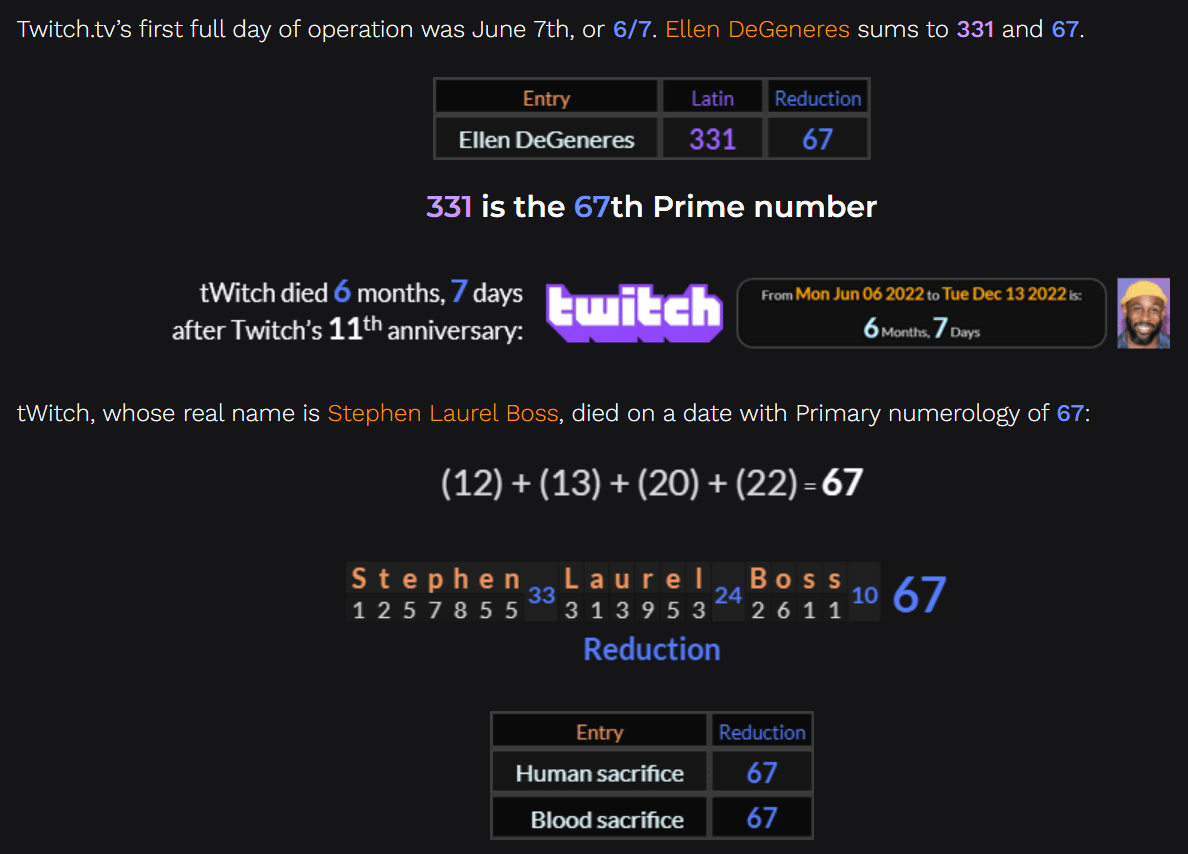 This is not the first time I’ve done a decode about someone connected to Ellen dying prematurely. See my post from December of 2020 on the death of actor Tommy Lister, the same day that the media published stories claiming Ellen could no longer get A-Listers on her show.

The fact that Ellen’s DJ has died is interesting because Ellen had her own foray into the music industry. Over a decade ago, she started a record label called eleveneleven, which was launched one year before ’11 and went defunct one year after ’11. The name Ellen is pretty close to the number Eleven.

tWitch started on Ellen in its 11th season

The name “tWitch” reminds us of Twitch, the #1 video game streaming platform.

Twitch.tv was founded in ’11

Of course, 1331 is the ultimate eclipse number. More on this below.

tWitch’s real name was Stephen Boss. The last name Boss in reference to a musician makes me think of Bruce Springsteen, whose nickname is the Boss.

This is the Ordinal gematria of Ellen’s label eleveneleven.

Notice how eleveneleven sums to 54 in both Reduction methods while the name Stephen Boss has double gematria of 540.

Notice how the headline states that Ellen is “Heartbroken.”

Ellen first aired on the 251st day of the year:

tWitch, whose real name is Stephen Laurel Boss, died on a date with Primary numerology of 67:

67 is also the gematria of Total solar eclipse.

The next eclipse to occur will be a Hybrid eclipse, so a part of the world will be seeing a total solar eclipse. The date of that event will also have Primary numerology of 67:

News of his death was published on December 14th, which was the two-year anniversary of the 2020 Argentinian total eclipse that fell on the same day the WHO approved the COVID vaccine.

tWitch was born on 9/29
He died on December thirteenth

The number 69 sits at the middle of the masonic Royal Arch, which is surrounded by the Sun and Moon:

The compass on the Freemasonic emblem is set to 47°, as it is used to draw The Circle.

The number 47 is integral to Killing rituals.

The date Boss committed Suicide also had Standard numerology of 47:

Notice how his full name also syncs up with Ellen DeGeneres and Human sacrifice.