This past January, Ellen turned 62 years old on the 26th day of the year, which is the same date Kobe Bryant died.

Her positive test fell on a date with 62 and 26 numerology:

This is an ideal date for a story about a lesbian well-known for voicing Dory getting a disease treated like a plague called the Covid virus. 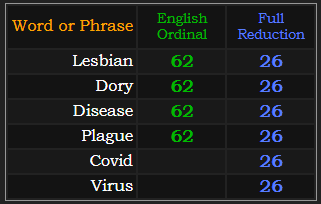 This story was on the same date that 62-year-old Tommy Lister Jr., who was born in the same year as Ellen, died in Marina del Rey after allegedly experiencing Covid-like symptoms:

His last name is Lister. Isn’t it strange that just one day before his death, we got this article, claiming that Ellen can no longer get A-listers to appear on the show?

As the headline shows, Lister was best-known for playing Deebo in the film Friday. His death made headlines on a Friday.

The movie was released on the 62nd birthday of Carol Burnett. Earlier this year, Ellen DeGeneres became the second-ever winner of the Carol Burnett Award at the 77th edition of the Golden Globe Awards in the first week of 2020. GG = 7-7.

Lister was born on a date with Reduced numerology of 35, the date leaving 175 days in the year:

Ellen was born on date with a Life Lesson number of 50:

In Reverse, Tommy “Tiny” Lister Jr. sums to 104. The character he played in Friday was named Deebo.

“Burnett” = 100. Lister died 100 weeks, 4 days after the first Carol Burnet Award was issued. Ellen was born on a date with Primary numerology of 104:

Burnett’s most famous project was The Carol Burnett Show, which has matching 104 gematria with her full name:

Ellen was diagnosed on 12/10, the same date Lister died, which was 319 days after Ellen’s birthday:

Ellen also has the same gematria as human sacrifice in Ordinal.

On the date 16/9, the song Marina del Rey by George Strait was released. Lister died in the city of Marina del Rey, exactly 1995 weeks after the release of the song:

The film Friday was released in 1995

It was a date with Primary numerology of 144:

Ellen is not straight

It makes sense that Ellen would catch the virus. Covid nineteen has matching gematria with Ellen DeGeneres.

Her name also syncs up with Covid in Reverse.

There’s a curious numerology fact about Ellen – on May 26th, 2010, she founded a record label called eleveneleven because she would often see the number 11:11 on clocks, among other things.

Notice how the gematria of eleveneleven syncs up with her birth date of 1/26, and the school she attended, New Orleans.

It’s been 126 months since she created that record label, and December 10th was 198 days after the anniversary of the announcement:

Ellen Lee is an Aquarius, which is ruled by the planet Saturn.

The name ELLEn LEe has “El” forwards once and backwards twice. “El” is the ancient Hebrew deity that represents Saturn. Consider how EL flipped upside-down is 73. In Hebrew, “Saturn” = 713.

This story fell on the date leaving 21 days in the year:

The Ellen DeGeneres Show debuted on the date September 8th, or 9/08.

Not only was Ellen diagnosed with Covid 900 weeks, 3 days later, but it’s also 93 days after the anniversary of the show’s debut: