Unsurprisingly, puppet president Joe Biden is using this weekend’s reported mass shooting at an LGBTQ nightclub to push the New World Order’s Agenda 21 component of gun control. It just so happens that this mass shooting not only fell on Biden’s birthday, but also on the anniversary of his official recognition of Transgender Day of Remembrance, because clearly, we don’t spend enough time thinking about queer lifestyles.

The fact that the shooting happened on Biden’s birthday and the anniversary of his declaration is strange enough. But also consider that Colorado, where this occurred, is the state that welcomed the first gay male governor in American history, Jared Polis, who assumed the position in 2019. Maybe “assumed the position” is the wrong phrasing for this particular article.

Adding to the alarming coincidences is that the perpetrator, Anderson Lee Aldrich, is the grandson of Randy Voepel, an outgoing member of the California senate. Voepel is a Republican and previously aligned himself with the Tea Party movement, so the media can conveniently frame this as a politically-motivated hate crime. 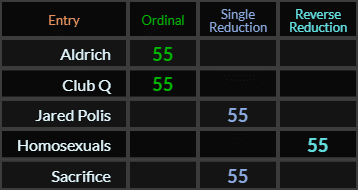 Anderson Aldrich carried out an attack similar to the one at Pulse nightclub 505 days before the next Total Solar Eclipse:

The date of the shooting and subsequent news fell on November 20th, which had Primary numerology of 73:

A mass shooting at a LGBTQ nightclub reminds us of the Pulse Nightclub shooting, where 49 people, most of whom were gay, were allegedly killed by a crazed gunman.

The shooter in Colorado Springs is named Anderson Aldrich.

73 is a number connected to the Ritual sacrifice code.

616 is the Fibonacci value of Colorado. Colorado Springs was incorporated as a riddle connected to the Callippic cycle, which has similar digits to LGBTQ.

In Reduction, International Transgender Day of Remembrance sums to 191. This is the value of Nightclub with capital letters.

Notice how this Homosexual governor of Colorado is the 43rd in the state’s history: 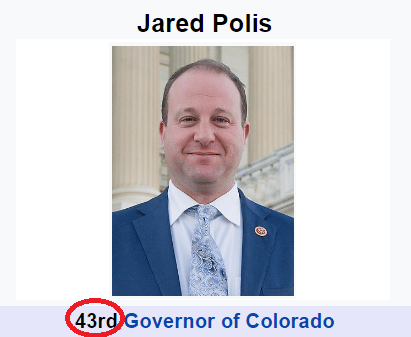 As mentioned above, the shooting concluded on November 20th, which is now the International Transgender Day of Remembrance:

The shooting stopped at 12:02, which is the Latin gematria of City of Colorado Springs, the city’s official name.

In recent weeks, I’ve discussed how major stories connected to homosexuality are connected to Annular solar eclipses. See my post on gay serial killer Jeffrey Dahmer and my other post on the death of NFL player Dave Butz.

See my video on another mass shooting in Colorado Springs at a trailer park from 2021.

The perpetrator has Latin gematria of 125. His grandfather was sworn into the California senate on December 5th, or 12/5.

Polis has the perfect birthday for a Transgender riddle. Just think of how his last name Polis sounds like pole-less. He was born on the 12th of May, or 12/5 in ’75:

The name Polis exclusively has the same three consonants as El Paso. Colorado Springs is located in El Paso County. In 2019, one of the deadliest shootings in US history took place in El Paso at a Walmart.

This year’s special Transgender day had Standard numerology of 53:

It’s quite intriguing that El Paso has matching 226 gematria with not only the governor’s full name, but also the full name of Colorado Springs’ mayor: