On Wednesday, November 16th, a man who was already driving the wrong way down the street veered even further and up onto the sidewalk, striking over two dozen men who were running during a police training exercise in Whittier, California.

Remarkably, this happened the exact same day that Darrell Brooks Jr., who killed 6 people last year in a similar incident involving an SUV at a Christmas parade in Waukesha, Wisconsin, received his life sentence. Recall how that attack happened just two days after Kyle Rittenhouse was found not guilty in a trial that was also in southeastern Wisconsin.

In a strange twist of events, the man who struck the recruits was RELEASED from jail today, just two days after the incident. Authorities claim this is due to the lack of an ability to prove intent. This is truly bizarre – particularly since the Wrong way driver, a 22-year-old named Nicholas Joseph Gutierrez, was said to have been completely sober. I wonder if they’ll also tell us he has perfect 20/20 vision?

On the day it happened, headlines were all reporting that 22 people were hurt:

22 is the Master Builder Number

The “Master Builders” of society are Freemasons, whose symbolic Capital G has gematria of 33 and 13.

The date these recruits were struck while Jogging had Primary numerology of 69 and 33:

This is a familiar number to False flag events involving Police. 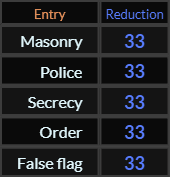 The LA County Sheriff’s annual budget is even listed as $3.303 billion:

Whittier, CA is located on the edge of the 33rd parallel:

The number 33 has matching gematria with both South Whittier and False flag.

This is a number connected to the Society of Jesus, whose symbol is representative of an eclipsed sun.

The crash occurred on a date with Reduced numerology of 13, and November 16th leaves 45 days in the year:

This is an important alignment because the number Thirteen has double gematria of 45 in Reduction.

The 45th Prime number is 197, which reveals just how connected Los Angeles, California is to the number 13.

This story is about injured Recruits, which not only sums to both 113 and 103, but also 567, which is the Standard value of Thirteen.

Note the 347, which I pointed out above…