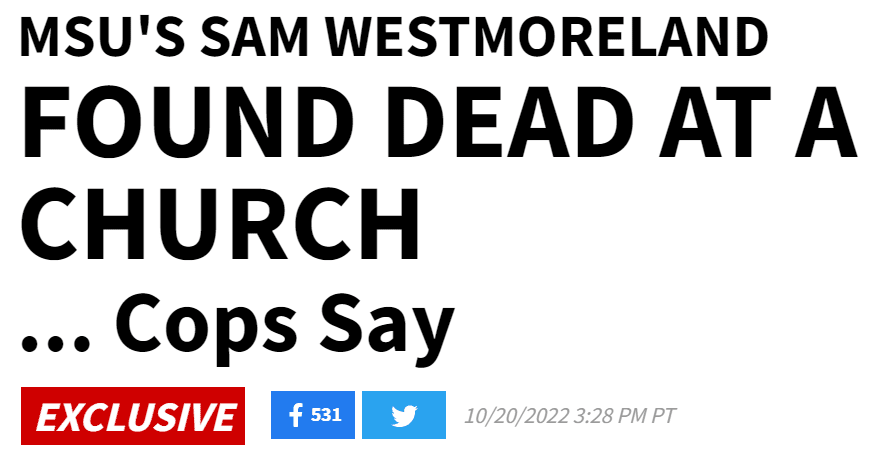 This tragedy at Mississippi State occurred in 2022.

I included TMZ’s headline here because I like how it’s phrased. It’s almost as if the editor at the publication is doubtful of this story, which involves a college football player being found dead at a Church on Wednesday a few miles from campus.

Westmoreland was a Football player for the Mississippi State Bulldogs, currently coached by Mike Leach. This is the same team that NFL quarterback Dak Prescott played for in college. Prescott is set to make his return from injury this weekend against the Lions.

Recall the digits 8 and 3 being displayed in the poster for the film Murder by Numbers:

The name of the church Westmoreland was found is Blackjack Missionary Baptist. While I was writing this post, my brother called me to ask if I wanted to play Blackjack this weekend. I wouldn’t make that up, because I would never expect you to believe that, but it’s actually true. Why would a church be named after a casino game anyway?

Dak Prescott currently has 54 career victories including the playoffs. If the Cowboys win in his return this weekend, it will be his 54th regular season win. This syncs up with the Ordinal value of Blackjack.

Westmoreland had Primary birth numerology of 54:

The start against Detroit will be the 91st of his career.

Blackjack Church is located at 33° of the northern meridian. Dak Prescott has 33 career losses in the regular season to go with 3 more in the postseason.

This is a number consistently found in stories about death. Recall how just yesterday, Apple‘s stock fell 0.33% on the same date we learned that Apple podcaster Tristen Nash died.

The matching 73 is a significant number of Ritual sacrifice.

Dak was drafted by the Dallas Cowboys.

I would imagine this has a lot to do with the fact that this guy was found at a church. I certainly expected some “Jesus” riddles for this date, and the media cabal delivered once again, as they will until they are somehow removed from the shadows.