It’s being reported that rapper Coolio has passed away suddenly while at a friend’s home. Coolio’s most successful song was Gangsta’s Paradise, which was the #1 song in all of 1995. Gangsta’s Paradise is based on the Stevie Wonder track Pastime Paradise. “Stevie” is short for his real name Stevland.

Shortly after Coolio’s version was released, he got into a beef with Weird Al Yankovic over his parody of the song, which gave Weird Al his biggest hit of the 90’s. This is highly relevant because earlier this month, Daniel Radcliffe portrayed Yankovic in a Funny or Die film called Weird: The Al Yankovic Story.

He died on a date with Standard numerology of 59:

This is a number stamped on black celebrities for all of known history. Motown Records, the label Stevie Wonder released his music under, was founded around the year ’59.

Coolio was born on the 1st of August, which can be written as 1/08 or 8/1. We’re being told that he suffered a fatal Heart attack.

The runtime of “Weird” is 108 minutes

Astrologically, 108 is an extremely-significant number to the geometry of the Earth, Sun, and Moon:

Coolio’s death was announced at about the same time Aaron Judge hit his 61st home run of the year. This snippet shows how big the number 18 was in that event: 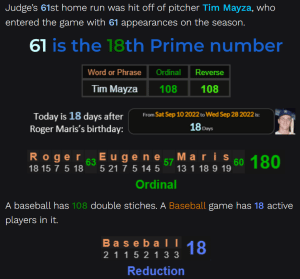 1234 is the Latin gematria of Al Yankovic. 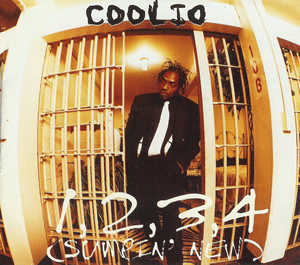 Remember how fellow rapper DMX was featured on an LL Cool J song called 4, 3, 2, 1 and the hospitalization that preceded his death last year fell on 4/3/21.

Stevie Wonder’s Pastime Paradise does not have a release date, but it was featured on an album called Songs in the Key of Life, which was released on the 28th of September, or 28/9. This stood out because Weird Al was 289 days after his birthday when Coolio’s track came out.

In ancient Hebrew, the words for Murder and Kill sum to 46.

Genesis Chapter 46 begins with a verse about Sacrifices. In English, Sacrifice and Paradise both sum to 46, as well as 73. Remember the “Sacrifice” event in Paradise, Nevada back in 2017.

73 is the Reduction value of both “Weird Al” Yankovic and Daniel Radcliffe, who played him.

Ivey was born under the sign of Leo. Gangsta’s Paradise was also released under Leo. This makes sense…Coo-lio…Cool Leo? Leo is the only sign ruled by the Sun.

The single’s release fell on a date with numerology of both 130 and 111:

Stevie Wonder’s original track sums to 156 in the alphabetic order.

Eclipses always occur 1, 5, or 6 lunar phases after the last one.

These are the same values as Coolio’s common name.

The gematria of Eclipse also matches Coolio and Gangsta. He was a span of 21,609 days old when he died in 2022.

It Takes a Thief to steal someone’s music and make their own album…maybe like Weird Al? Maybe that’s a stretch…