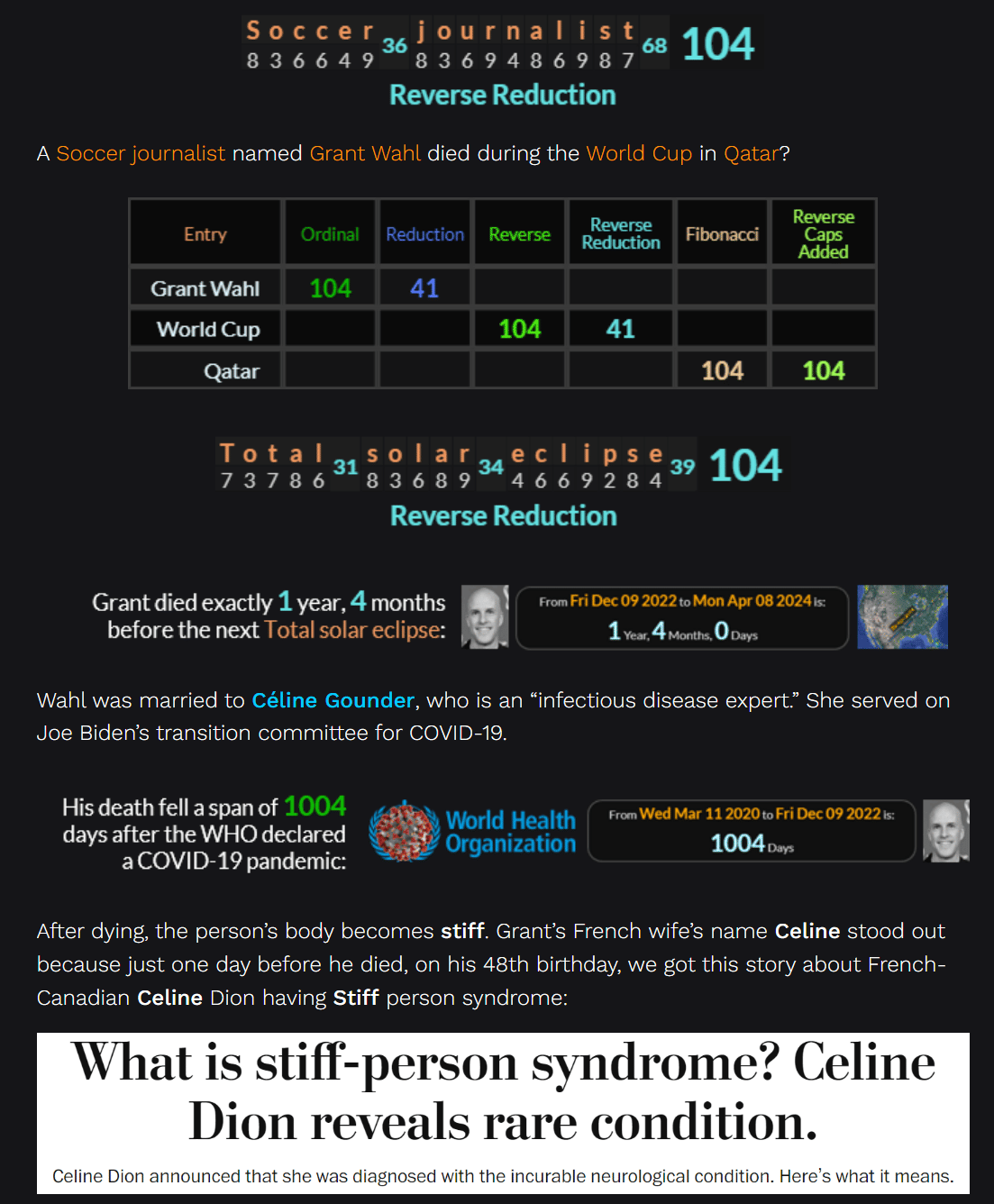 Grant Wahl’s brother believes he was killed because he had worn a shirt promoting the acceptance of homosexuality at previous World Cup games. Qatar is not as fond of same-sex couples as the United States – in 2013, the Defense of Marriage Act was was altered to allow gay marriage to be recognized by the federal government.

The Defense of Marriage Act was initially passed by the 104th U.S. Congress under Bill Clinton.

During a total eclipse is the only time the Sun’s corona can be seen. Wahl was married to Céline Gounder, who is an “infectious disease expert.” She served on Joe Biden’s transition committee for Coronavirus.

After dying, the person’s body becomes stiff. Grant’s French wife’s name Celine stood out because just one day before he died, on his 48th birthday, we got this story about French-Canadian Celine Dion having Stiff person syndrome:

COVID-19 allegedly developed in the year 2019, which syncs up with his wife’s Reverse gematria.

Notice the Ordinal value of 132. Because of her profession, one may reasonably conclude that Grant had taken the COVID-19 Vaccine so that his jet-setting Journalism career could carry on.

The name Wahl is a supermatch with the word Kill. He died while watching Argentina win at Lusail Stadium one day after his birthday, which was December 8th, or 12/8.

It was the year 2020 when governments’ responses to the Coronavirus pandemic rocked the world.

In the year 2020, Wahl created a newsletter publication called Futbol. He died standing up for LGBTQ rights during FIFA‘s 22nd World Cup in the year ’22. Of course, there are 22 players on the field during a game of international football and even American football, which is run by the National Football League.

His brother thinks he was killed because he was promoting the acceptance of Gay people. He fell Ill while watching Argentina defeat the Netherlands. The name Celine also sums to 48, like Wall, which sounds like Wahl.

Grant died in Qatar, which matches Moon in gematria.

The Earth is 11/3rds the size of the Moon. Grant was born on a date with Primary numerology of 113:

As I explained in great detail back in April of 2020, the forthcoming COVID vaccine was part of a 666 ritual connected to the total eclipse code. Notice how the name Céline Gounder sums to 69 and 66.

His death fell just before Argentina defeated the Netherlands.

Joe Biden Brings Brittney Griner “Back From the U.S.S.R.”
Baker Mayfield Does the Impossible, Wins Two Days After Trade