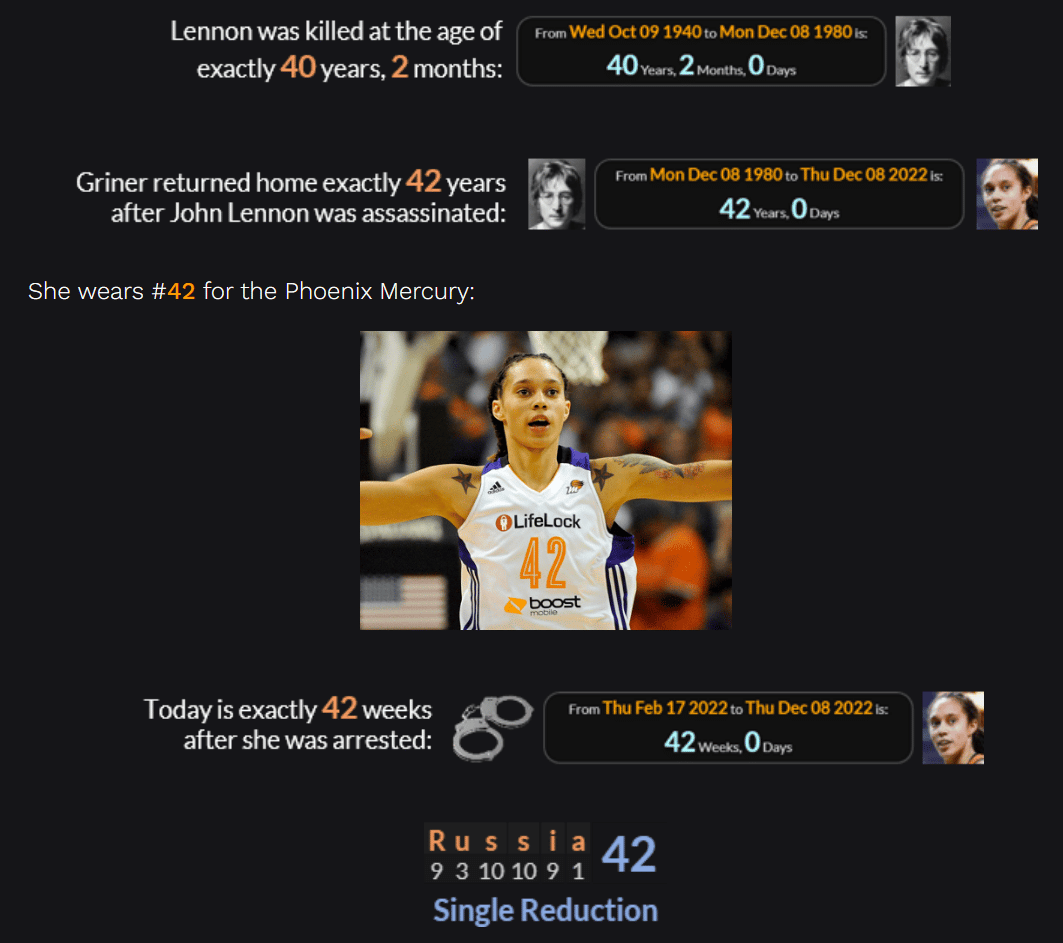 Brittney Griner was born on the date leaving 74 days in the year:

74 is one of the most easily-identifiable numbers of high significance. This is highlighted in the story of Jesus Christ.

The name Lennon has matching 74 gematria with Forty-two.

42 is the number of generations that lead to Jesus at the beginning of the New Testament.

At the end of the New Testament, the Beast rules for 42 months.

She wears #42 for the Phoenix Mercury: 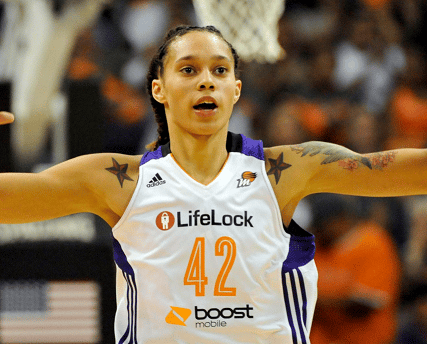 The name Griner is just one letter (and one gematria value) off of Grindr, which is the world’s largest gay dating app. Griner, a member of the WNBA, is married to another woman. She was returned to the U.S. on the same date that the government, led by Nancy Pelosi, passed a bill to protect gay marriage.

It was 42 days after Nancy’s husband Paul was allegedly attacked at their home with a hammer. John Lennon’s songwriting partner was Paul McCartney.

Consider how the number 42 has been stamped on black people throughout history. It must be the most well-documented fact in all of numerology. Check out this post from 2020 for a perfect example involving the #42 car in NASCAR.

Griner’s release was made possible by the mutual swap of American prisoner Viktor Bout, who is certainly happy to be Back in the U.S.S.R. – which happens to be the name of a song John Lennon co-wrote as the opening track of the Beatles’ White Album.

The 42nd Prime number is 181
The Beatles are from Liverpool, England

Many people believe Jesus’ real birthday was the 11th of September, or 11/9.

Lennon was assassinated on a date with Primary numerology of 119:

This story was the same date that the government passed a bill to protect gay marriage. Griner plays in the WNBA, so the connection goes without saying.

Brittney Griner has matching 366 gematria with the full name of Viktor Bout, who is a convicted Arms dealer.

Bout was known as the “Merchant of Death.” The god of merchants is Mercury. Brittney Griner plays for the Phoenix Mercury.

Another of the most well-documented examples of numerology in the media involves the number 113, which can be construed to look similar to the word liE. 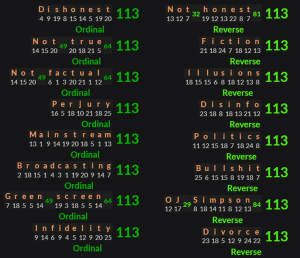 Along with Paul McCartney, John Lennon made up one-half of the songwriting credits for a 1968 track titled Back in the U.S.S.R.:

Back in the U.S.S.R. was part of the White Album. Paul Whelan is the name of the marine who remains in Russian custody. Whelan is White, and Griner is Black, which is what the media wants us to focus on amidst all of this.

She was arrested on February 17th, or 2/17. John Lennon was murdered by a man named Mark David Chapman.

He was arrested during Brown Lunation number 1053.

Viktor Bout was born a span of 97 days after John Lennon’s birthday, and exactly 97 weeks later, Back in the U.S.S.R. was released: