Just five days after former British Prime Minister Liz Truss stepped down, she has been replaced by Rishi Sunak.

On the date she took office, she visited the Queen at Balmoral Castle.

The first ever Prime Minister of the United Kingdom was Robert Walpole, who assumed the initial role in the year 1721. Walpole was the longest-serving Prime Minster, while Truss is now the shortest.

One day before Sunak took over as Prime Minister, he became the Leader of the nation’s Conservative party. On that same date, October 24th, Michael Phelps announced the death of his father Fred, who shares his full name. Doesn’t Phelps bear an odd resemblance to the new PM? 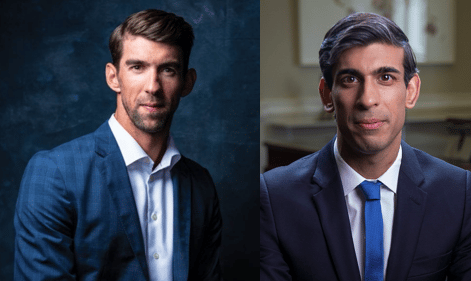 Michael Phelps became the most decorated Olympian in all of history by winning his 19th overall medal at the 2012 Summer Olympics held in London, which were officially opened by Queen Elizabeth herself.

Michael Phelps is a Cancer, which is not only a water sign, but is ruled by The Moon.

He was sworn in on a date with Standard numerology of 57:

Sunak assumed his new position on October 25th, which was the date of the second solar Eclipse of 2022.

Prime Minister Rishi Sunak was elected on the 297th day of the year:

Sunak is Indian, thus becoming the first non-Caucasian to hold the role. This is a trait he shares with London mayor Sadiq Khan, who was born to Pakistani parents. Khan was a span of 19011 days old when Sunak took over:

This alignment is particularly significant because not only does Freemasonry pay special attention to solar eclipses, but Masonry is a supermatch with Walpole.

In Ordinal, Scottish Rite of Freemasonry has a value of 325.

Are these interconnected news stories involving London letting us know that famous people are being bred in some fashion? This reminds me of the name London Breed – who is the current mayor of San Francisco.

London has Primary birth numerology of 112, and was born on the 223rd day of the year:

Rishi Sunak is from Southampton, which has matching Ordinal gematria with Robert Walpole.