This story is about a red panda who made national headlines way back in 2013 when he escaped from his enclosure at the Smithsonian Zoo in Washington, D.C.

Rusty died on the 14th of October, or 14/10, but the national media did not publish the story until October 21st, the one-year anniversary of the shooting involving actor Alec Baldwin on the set of the film Rust.

Speaking of Red Pandas and big-budget films, this past March saw the release of the film Turning Red, which is about a girl who is transformed into a large Red Panda: 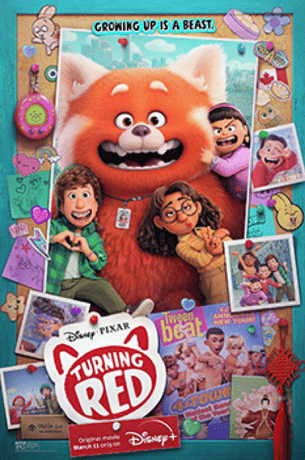 The Pueblo Zoo announced the death of Rusty the Red Panda a span of 233 days after the film’s initial L.A. release, and his death made the news exactly 32 weeks after its wide release ten days later:

233 is the Ordinal value of Thirteen thirty-one, which is the ultimate Eclipse number. 233 is the 51st Prime number.

233 is also the 13th Fibonacci, Meilin Lee, the main character of Turning Red, is 13 years old during the film.

In this film, which takes place in the year 2002, the main character Mei discovers that the only way to rid herself of this new dangerous Red Panda form is to undergo a ritual during a Lunar Eclipse. Disney films certainly aren’t what they used to be…

18 is the number associated with the Moon in the Tarot, as it’s the approximate length of the Saros cycle and is the sum of 6+6+6.

It takes 33 solar years for the lunar calendar to fall back in sync. The words Lunar and Eclipse both sum to 33, which is connected to the number 156.

That’s not the only connection 156 has to the Smithsonian Institution, whose symbol is a Sun with crooked rays.

22/7 is typically the first day of Leo, the only sign of the Zodiac ruled by the Sun.

The Smithsonian is in Washington, D.C., which is a virtual supermatch with Total eclipse.

The constellation of Leo is symbolized by a Lion. The Smithsonian Institution was founded on August 10th, which is World Lion Day:

As it turns out, on October 19th, the same day that Rusty’s “unexpected” death was announced, Luke, a lion who was still residing at the Smithsonian Zoo, was euthanized after a long illness:

The 17-year-old lion died on a date with Reduced numerology of 17: