Roger Maris was the man who broke Babe Ruth’s longtime single-season home run record, which was 60.

To this day, no American League hitter has matched this tally. However, it looks like Roger‘s record is in danger here in 2022.

Perhaps the most significant number connected to The Moon is 666.

666 is essentially the Reduction gematria of Roger Maris.

Both he and Judge had their best seasons playing for New York.

His debut fell a span of 244 days after the anniversary of Roger Maris‘s death, and 123 days before the next anniversary:

There are 57° in the Moon‘s range of declination.

In Single Reduction, Maris’s full name sums to 99. This is the number Aaron Judge wears on his uniform: 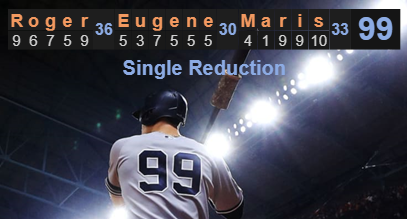 When you turn the number 666 upside-down, you get 999. This is reflected in the Ordinal gematria of The Moon.

Six six six and Triple sixes both also sum to 156.