As the news likes to subtly remind us every so often, politics is basically pro wrestling without the actual matches. But why go so far as to call this a “cage match rematch”, when “rematch” would have made a lot more sense?

Today is July 12th, or 7/12. The first-ever cage match in the history of pro wrestling featured a wrestler named Count Rossi.

Today’s date is also written as 12/7 internationally. The word Wrestling sums to 127.

This headline comes from former Trump campaign manager Kellyanne Conway, who made this statement because she thinks Republicans won’t go back to Pre-Trump days.

We are currently in the time of Cancer, the only Moon sign on the Zodiac. The Moon’s most significant cycle is the Metonic cycle.

Most cage matches in wrestling are promoted as a Steel Cage match. Today has numerology of 61 and 16:

Kellyanne Conway’s official title in the White House was Counselor to the president.

The phrase Steel cage sums to 77 in Ordinal.

Joe Biden is Jill Biden‘s husband. She just happens to be all over the headlines today too: 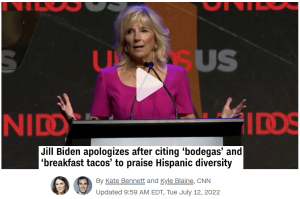 According to Bleacher Report, the first cage match actually occurred a week after the generally-accepted date, on July 2nd of 1937. If that were true, then it was 1967 days before Joe Biden’s birthday. Conway was born in the year 1967.

The first-ever Pro wrestling Steel cage match was held on June 25th, the 176th day of the year, which is written internationally as 25/6.

The next election year, Twenty twenty-four, has matching 158 gematria with Cage match.