I have mixed emotions on this story. The text on the Georgia Guidestones and the story of its erection provided some intriguing evidence of a real-life depopulation agenda, but the monument itself wasn’t evil, and destroying it certainly does nothing to stop whoever’s idea they were.

The vigilante inside of me would like to believe that yesterday’s bombing was the act of a random person upset at the federal government, but something tells me otherwise. Regardless, there is some very interesting numerology to go along with this story.

The Bomb at the Georgia Guidestones went off in the early morning hours of July 6th, or 7/6, which happened to be the 76th birthday of former president George W. Bush:

The Area Code in Elbert County is 706

Bush, just like his father, both belonged to the Skull and Bones fraternity at Yale University.

Skull and Bones’ emblem famously has the number 322 etched under the skull and crossbones:

Super Bowl LVII falls on the date leaving 322 days in the year:

Bush was the president during the attacks of 9/11, which occurred on the 11th anniversary of his father announcing a New World Order, which in conspiracy circles is an umbrella term for the shadow world government. Most NFL teams will be playing their first game on 9/11 this season.

George is a Cancer, the only sign ruled by the Moon.

911 is a very important number to the Total Eclipse code.

The Guidestones were placed just a couple of miles inside the path of totality for the 2017 Great American Eclipse:

It happened on the 187th day of the year, leaving 178 on the calendar:

While I never made this comparison before, the Georgia Guidestones always felt like a similar monument to the New World Order Airport Commission plaque at the controversial Denver International Airport. The date on the plaque reads March 19th, 1994:

That date was exactly 187 sidereal months (lunar orbits) after the Georgia Guidestones opened:

Learn why 666 is such an important number to eclipses.

The September 11th attacks happened in 2001.

Super Bowl 57 will be played on a date with Primary numerology of 57, which is the Ordinal value of George and Moon:

Both George Sr. and George Jr. graduated from Yale University. The Super Bowl will be played on the 43rd day of the year:

The Guidestones, which opened on a date with a Life Lesson number of 43, would have turned 43 years old shortly after the Super Bowl:

43 days before the bombing, Republican Kandiss Taylor lost Georgia’s gubernatorial primary against incumbent Brian Kemp. One of her campaign promises was an executive order to destroy the Georgia Guidestones: 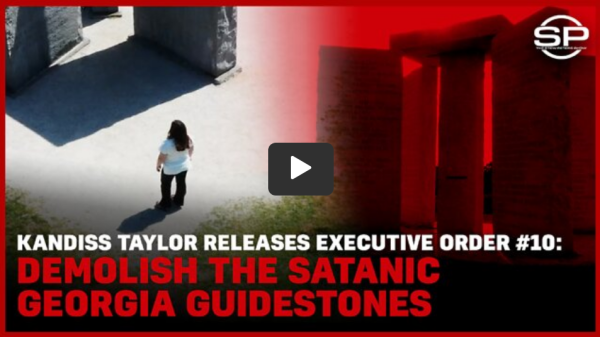 Notice how she calls them “Satanic.” In Satanic gematria, Guidestones sums to 523.

Their actual destruction fell just one day after they turned 523 lunar phases old: