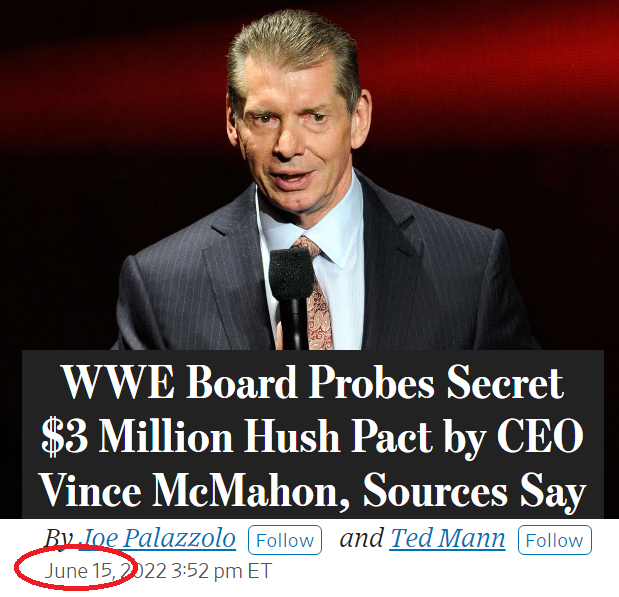 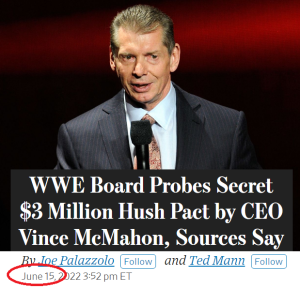 Notice the Wall Street Journal broke this story on June 15th, or 15/6.

156 is a significant number connected to the 666 code.

Vince’s middle name is Kennedy. One day after John Kennedy was assassinated, he turned 6666 days old:

The WWE Network originally launched at $9.99, where it remained for many years.

McMahon was a span of exactly 1800 weeks old when the WWF was officially incorporated:

That incorporation date was in 1980. 666 is considered the number of the Beast, and is essentially the primary number of the Moon.

One day before McMahon turned 724 sidereal months old, he changed the official name of the company:

The name change occurred in 1999, which has an upside-down 666. The new name was World Wrestling Federation Entertainment, Inc, which matches the numbers in the base gematria of Luna that Vince McMahon does not.

The story says his company is under investigation for a payment worth Three million dollars to a former staffer to cover up an affair. The number three on its own is often used as a hoax code.

As a result of the controversy, McMahon has stepped down as WWE Chairman, a role he has held since his purchase of the company in the early 80’s.

Some people believe the Beast’s real number is actually 616. Although WSJ published the story on the 15th, it dominated the headlines on June 16th, the date written 6/16, a major number of the Ritual sacrifice of JFK mentioned above.

In Ordinal and Reduction, Ritual sacrifice has gematria of 73.

One day later, long-time WWE referee Dave Hebner reportedly passed away at the age of 73:

Dave is the twin brother of Earl Hebner, which is worth mentioning since we are approaching the end of Gemini, the sign represented by the twins.

On that same 15/6 date, Dave’s nephew Brian, who is the son of his twin brother Earl, announced his retirement as a full-time referee:

On June 17th, the same date Dave Hebner died, Vince McMahon stepped down as the chairman of WWE. That date fell 15 years, 6 days after McMahon staged his own death on television:

This is relevant because McMahon’s fake death in 2007 was 13 days before the bizarre murder-suicide incident at Chris Benoit’s house.

Just two days after the death of Dave Hebner, another famous referee from WWE’s Attitude era died. Tim White passed away at 68:

I thought it was interesting that a man named White died on the anniversary of Juneteenth being named a national holiday.

Tim White’s career as a referee ended due to injury in May 2002, which was the same month that the WWF permanently changed its name to WWE. White got hurt at a Hell in a Cell match at an event called Judgment Day. He died less than two weeks after this year’s Hell in a Cell event. The day after that show, pro wrestler Edge was booted from his own group called Judgment Day.

After suffering that career-ending injury, White returned for just one match at WrestleMania XX, which was the event that ended with Chris Benoit and Eddie Guerrero embracing in the ring, both having won World Championships. Both Benoit and Guerrero would be dead within the next four years.