According to Rolling Stone, the second-best album cover of all-time is Abbey Road, where the Beatles are seen walking on a continental crosswalk:

Today is June 18th, which is Beatles legend Paul McCartney’s birthday. Both he and Biden were born in the same year:

McCartney’s 1993 solo album Paul is Live features McCartney crossing the same intersection by himself. CNN has the below image in their article celebrating his birthday today: 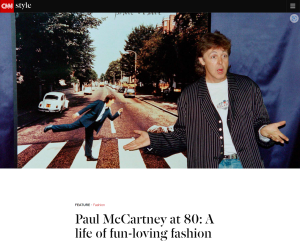 Today is also 1 day after Biden’s 45th wedding anniversary. The album name “Paul is Live” is a response to the Paul is Dead theory that began mainly due to the Abbey Road cover.

Biden’s family was in a Car crash several years later in Wilmington, DE, resulting in the death of his first wife.

Biden fell off his bike in Rehoboth Beach, Delaware, which has matching 1088 gematria with Abbey Road Studios.

You have to appreciate that Paul is walking a Sheepdog across the street in his album cover. Biden, who is undoubtedly a sheep following his handlers’ orders, is 79 years old.