Counting midnight as the first minute, governor Kevin Stitt made his Twitter statement at 8:11 pm, which is the 1212th minute of the day: 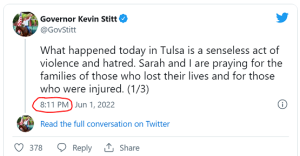 I found it interesting that the governor called this an “act of violence and hatred.” Notice how they are using the word hate more and more, even though there’s no evidence this was based on race or any other prejudice.

We’re being told that this is the 233rd mass shooting in the US this year. Learn why that number is important to this code.

Tulsa, OK matches The Moon. Recall how Donald Trump held a rally in Tulsa 99 years after the massacre there.

The word Eclipse has matching 69 and 156 gematria with False flag.

Kevin Stitt has also matching 149 gematria with Francis Xavier and Tulsa, Oklahoma. The shooting was on a date with Primary numerology of 49:

The shooting was on June 1st, written 6/1, matching the governor’s first and middle names.

The Active shooter situation at Saint Francis Hospital occurred on June 1st, or 6/1.

If you flip the date upside-down, you get the number 19.

Back in 2020, I identified a major riddle for Donald Trump for the date June 20th. A few days later, he announced that he would be holding his first post-Corona rally on June 20th in Tulsa, Oklahoma.

The rally was on the last day of Gemini, which is Trump’s birth sign, and the sign the Sun is currently in. The day of the week named after Mercury is Wednesday, which is when this Shooting at a Hospital went down.