This obviously isn’t a music blog, but a few things about this popped out at me and I figured I’d document it.

During my foray back into electronic music at the end of last decade, a few of my absolute favorite records I discovered were from a duo called Odesza.

The group is wildly popular among EDM crowds, but you don’t really hear much of their music on the radio (at least not where I live). I would probably argue that the absence of their music from the mainstream, as well as that of similar artists, is because it can elicit very positive feelings, which of course the controllers of our culture wish we would stop having.

Perhaps it’s simply that most people just don’t enjoy good music (yeah I’m a snob). Whatever it’s all about, today I saw that they’ve been releasing some new tracks from an album set to come out in July. This prompted me to take a peak at their numbers, which I’d yet to do, and see if anything stuck out.

Of course, one half of the duo has the same date of birth I do. Harrison Mills was born on my Golden Birthday, June 4th:

The 4th Prime number is 7

Mills has Primary birth numerology of 118:

Knight has Standard birth numerology of 118:

“One eighteen” = 62. The two producers were born exactly 62 weeks apart.

The poster for the show contains some potential Eclipse symbolism, including a guest group called Golden Features whom they recently partnered with: 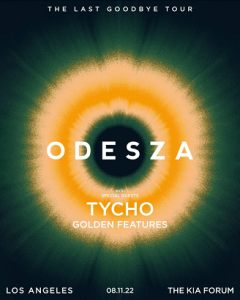