1 dead, 3 injured in a shooting in Kissimmee at a store with a bullseye as its logo?

Converting to weeks, we get another very relevant number. 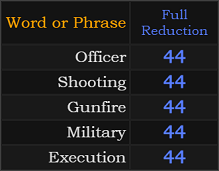 The number Forty-four has matching gematria with Orlando, Florida, which Kissimmee is a suburb of.

This Shooting fell on a date with numerology of 37 and 53:

The Target store involved in this incident is located on Irlo Bronson Highway:

Irlo Bronson was a Florida politician who is best-known for selling private land to Walt Disney to allow for the construction of Walt Disney World:

This is relevant considering how much Disney we’ve seen in the news lately, as governor Desantis and the state’s conservatives attempt to end Disney’s special tax status:

Early this year, I blogged about how the death of comedian Bob Saget, who died in Orlando, was also coded to the number 44.