In March of 2020, I made this post on the death of a former NFL player, Orlando McDaniel. McDaniel was drafted out of Louisiana State University, who had just happened to win the College Football National Championship earlier in the year.

The LSU Tigers were led to victory by quarterback Joe Burrow. Now that Burrow has made it to the Super Bowl with the Cincinnati Bengals, let’s re-visit that story to see how it connects to LSU legend Billy Cannon, who was the school’s last Heisman Trophy winner before Joey Franchise. One day before upsetting the Chiefs in the AFC Championship, an actor named Howard Hesseman died as a clear nod to this riddle.

Burrow transferred from Ohio State to LSU on May 20th, 2018:

Cannon played for the Oilers, Raiders, and Chiefs – the same three franchises Burrow defeated to make it to the Super Bowl:

The date written 31/10 is Halloween, which has matching gematria with Cannon’s full name.

Billy Cannon’s most famous play for LSU was the Halloween run, which was an 89-yard punt return for a game-winning touchdown. It happened 89 days after his birthday (or 277 days before his next):

Billy Cannon (or William Cannon) won the Heisman Trophy as a Tiger in ’59.

Joe Burrow won the National Championship for the LSU Tigers on the 13th day of the year:

This is the main number coded into this NFL season, which is ending in the NFL’s 103rd year of existence.

Taylor’s full name is Zachary Taylor, identical to the President with the same name. President Taylor died in office, giving way to the 13th U.S. President.

The name Cannon is a homonym with Canon, a word often used by the church to refer to the collection of biblical texts. The Canon of Kings was a list for astronomers used to calculate the dates of eclipses, and has evolved into the Five Millenium Canon of solar and lunar eclipses.

Just one day after Burrow made the Super Bowl, a man named McDaniels, who has spent most of his career with New England, became the new head coach of the Las Vegas Raiders. Check out how old he was when he signed on 1/31:

A week later, Mike McDaniel was hired as the 13th head coach for Miami.

See more about how 13 is encoded into the Super Bowl in this post.

Not only is this the Ordinal value of Burrow, but it’s found all over the name of his coach Ed Orgeron.

William Cannon died on the 140th day of the year:

This number is found in the common and full names of William Nicholas Cannon.

The name Cannon leads us to the next big piece of the riddle. There is one team in the NFL that likes to fire cannons off during a game – the Tampa Bay Buccaneers: 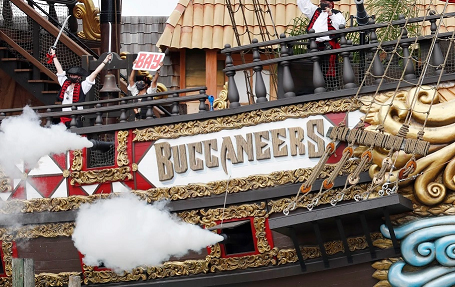 This stadium is called Raymond James, which sums to our major eclipse number.

The quarterback of the Buccaneers is Tom Brady – well, up until yesterday, that is, since he filed for retirement. Cannon and Brady share the same 8/3 birthday:

This number circles back to LSU’s head coach for their Title game, Ed Orgeron.