Actor Howard Hesseman is being reported to have died following complications from colon surgery. Hesseman died just one day before the Cincinnati Bengals made it to the Super Bowl, which is very relevant because he was an actor on the TV series WKRP in Cincinnati, which ended just three months after the Bengals appeared in their first Super Bowl.

This year’s championship game is Super Bowl 56. Howard’s character on the show was named Johnny Fever.

He died 56 days after the last Total eclipse:

Howard was 81 years old, which is the Reverse value of Cincy, the city’s nickname.

This will be the first time the Cincinnati Bengals have played in the Super Bowl in 33 years.

Howard Hesseman has matching 1312 gematria with the Bengals’ quarterback, Burrow.

In June of last year, Howard’s co-star from WKRP in Cincinnati Frank Bonner died, which was broken down in this post.

Hesseman’s death fell on a date with Primary numerology of 72:

The planet Saturn takes 54 weeks to fall in conjunction with the Sun. For the first 54 Super Bowls, no team ever played the championship game in its home stadium. This will now be the second straight year that it has happened – conveniently coinciding with the start of COVID-19, when everybody was told to stay home. The Bengals even beat a quarterback named Mahomes to get there. (Consider how one of COVID’s symptoms is a high Fever).

This year’s game will be played in California at the home of the Rams. The California code for murder is 187:

In the television series, Hesseman played a character named Dr. Johnny Fever, which has matching 187 gematria with WKRP in Cincinnati.

There were a total of 88 points scored in this weekend’s Championship games: 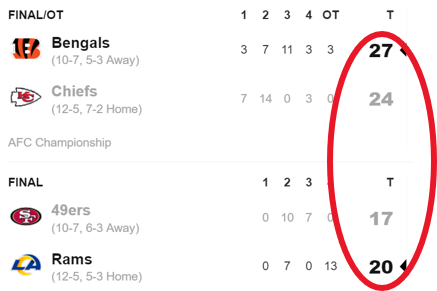 This is the Jewish gematria of Saturn. See my Super Stream from a couple of weeks ago where I explain how this year’s Super Bowl is coded with the numbers of Saturn. The Bengals will be playing against Matt Stafford, whose name sounds similar to Saturn.

A bengal is a type of tiger, and the Chinese Year of the Tiger begins on February 2nd. A tiger’s stripes are symbolic of Jupiter – the Super Bowl falls exactly 419 days after the 2020 Great Conjunction, to go along with how “Cincinnati Bengals” = 419 above.

Rounding to the nearest integer, Saturn takes 29 years to orbit the Sun, or “return home.” His character’s name, Fever, sums to 29.

Cincinnati is in Ohio, which is known as the birthplace of professional Football.

Howard Hesseman died on the 29th day of the year:

He would have turned 82 years old next month.