Here are the seven potential names that Washington will announce as their new football team name next month: 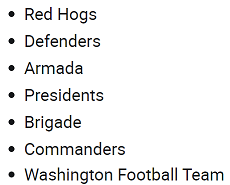 While I personally think “Washington Armada” has the coolest ring to it, I think Washington Red Hogs will be the most likely. For starters, the word Red is a nod to their original name, the Redskins, which is nice…however, one might wonder if they will tweak the colors to encourage more merchandise sales.

The name Hogs also has some history with the franchise. For three decades, the famous Hogettes used to cheer the team on at every home game – this was because The Hogs was the nickname of the Offensive Line, who led them to three Super Bowl championships.

The team from Washington, the capital of America, is owned by Dan Snyder.

The man responsible for the Hogs‘ success was line coach Joe Bugel, who happened to pass away just fifteen days before Washington axed their original name in 2020.

That date will be the Chinese New Year. The current “pandemic”, the focus of the Washington government, allegedly began in China in 2019, which was the Year of the Pig on the Chinese Zodiac.

“Master” = 22. Bugel was the “architect”, or master builder of their dominant Offensive Line.

There are 22 players on the field at any given time during a game. Recall how the Raiders officially announced their move to Las Vegas on the 22nd day of 2020.

COVID Nineteen is the Revelation ritual that I saw coming, as I detailed shortly after it first began.

The Book of Revelation was written by John of Patmos. The seven trumpets (or bugels) warn of the apocalypse – Joe’s middle name was John and his last name was Bugel. See my post on Kearny, Arizona for more on how serious this symbolism is to the occult.

The announcement will also fall a span of exactly 47 weeks after the date Bugel was born: