In the original Matrix film,  the main character Thomas Anderson makes a choice to take the Red Pill, beginning his journey captured within the first trilogy.  Matrix Resurrections begins by showing what Anderson’s life would be like had he instead chosen the Blue pill – this provides an intriguing perspective on the Many-worlds interpretation, or MWI.

The movie begins with Keanu Reeves, who plays Mr. Anderson, operating a Modal testing environment of the Matrix.

The number 45 sums to 126, a number shared with Keanu Reeves, who plays Mr. Anderson in this exploration of the Many Worlds interpretation.

The man credited with the MWI theory of quantum physics was Hugh Everett III. Matrix Resurrections had a pre-release in San Francisco, where it is based from, on 12/18.

Reeves, who plays The One, has Primary birth numerology of 94:

Note especially the number 77. This is also a shared value with the word Matrix and Christ.

Anderson is shown about to Fall from a building in two different scenes – the first time is 2203 seconds in, and the second happens at 40:40:

He is saved both times by Bugs, whose name is a reference to Bugs Bunny.

As Bugs and Morpheus escape the theater in one of the film’s opening scene, we get a brief glimpse at the name of the movie being shown. Notice the two posters showing a distinct cross shape, referring to Christ. The address on the building is 77:

1111 is widely-regarded as the “wake-up” number. Consider how Alex Jones, who is trying to wake people up to the New World Order, sums to 1111.

He was born in Washington, D.C. The number 1930 is very similar to the gematria of Washington Football Team.

One day after the release of Matrix Resurrections, Washington safety Deshazor Everett was in a fatal car wreck in Virginia.

The woman who died in that crash was from Las Vegas. That’s where the crash involving Las Vegas Raiders wide receiver Henry Ruggs, which was all about the number 22, occurred.

Deshazor’s full name sums to 101 in Reduction, which represents 11 in numerology.

In the original Matrix trilogy, Anderson lives in Room 101:

In the film 1984, which is also about overarching systems of control, Room 101 is a prison chamber where man’s darkest fears are manifested: 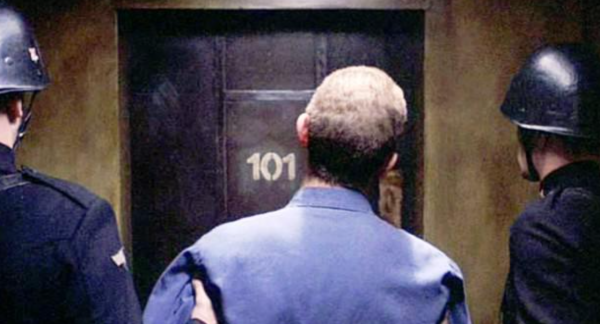 Both her and Everett’s names sum to 74.

In the original film, Neo is shot near the heart at the Heart o’ the City Hotel through the door of Room #303:

When Neo dies again in the third film, there is similar Christ symbolism: