The Browns’ kicker made his NFL debut tonight, on Christmas day. His name is Chris Naggar. Most people can reasonably deduce that Christ was more likely to be a black man than a white one. You can put two and two together here…it’s sick.

There are 2422 days between the two Great American Eclipses:

Both eclipses were 1211 days away from the 2020 Total Solar Eclipse. The Mayfield tornado occurred on 12/11, right near the intersection of the two Total Eclipses.

Baker Mayfield‘s jersey has four 6‘s on it:

These Eclipses, the second of which passes directly over Cleveland, are also separated by a span of 6 years, 6 months, 6 weeks, and 6 days: 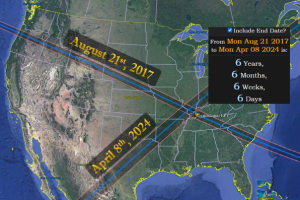 666 is a very important Eclipse number.

Christopher Naggar signed with the Browns on September 2nd, written 9/2 or 2/9. That’s the birthday of Keanu Reeves:

The Matrix was released in ’99

The Matrix was released on 3/31, a date with Primary numerology of 133:

The Packers were founded in 1919