The Sun is approximately 93 million miles away

After about two decades of incompetence, Brett Lorenzo Favre led The Green Bay Packers to their first postseason of a new era in the year ’93.

In 2008, the Packers were ready to move on from Brett Favre, as backup QB Aaron Charles Rodgers had shown that he was ready for a starting role.

Aaron dressed up as John Wick for Halloween: 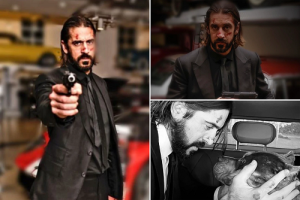 Today, Rodgers broke Brett Favre’s franchise record for most career touchdown passes. Favre was known for being a bit overzealous on the field, and has the most interceptions thrown in NFL history. Rodgers, on the other hand, is the most efficient QB in NFL history, and has broken Favre’s record with only 93 career interceptions:

On Christmas, we remember the birth of God’s son, who was from Nazareth and died on the Crucifix on the 93rd day of the year between 9 am and 3 pm.

The record-breaking pass was caught by #13, like Jesus’ initials of J.C.:

That receiver’s name is Allen Lazard.

It was Lazard’s 11th career touchdown

It was his 12th TD if you include the postseason. Rodgers of course wears #12.

Lazard has Primary birth numerology of 137:

The Crucifixion of Lord and Savior Jesus Christ is believed to have been crucified at age 33 in 33 A.D.

The Moon’s Metonic cycle is 19 years long, 7 of which contain a Thirteenth month (lunar phase).

Rodgers currently has 45 postseason passing touchdowns. He was the MVP of Super Bowl 45.

The Metonic cycle is 19 years long.

If you include the playoffs, this was Aaron Rodgers‘ 488th career touchdown pass.

1919 is the Jewish/Latin value of 1331, the ultimate eclipse number. The game was played in Green Bay, Wisconsin.