It’s being reported today that rapper Young Dolph has been shot and killed in the state of Tennessee.

It’s worth noting that Young Dolph is yet another celebrity whose birthday has changed recently, having been listed as August 11th up until earlier this year. It just so happens that his real birthday, according to his Twitter feed anyway, is the same as WWE Superstar Dolph Ziggler.

He died on a date with a Life Lesson number of 33:

Dolph was from Memphis, and his debut album was called King of Memphis. His death fell 333 days after (or 33 days before) Memphis’s date of incorporation:

On his final day of being 33 years old, Young Dolph released an album called Dum and Dummer with fellow Memphis rapper Key Glock.

Key Glock was born on a date with Primary numerology of 127:

Key Glock’s birthday is 8/3/97. Anyone with a keen eye for numbers, like this researcher, would have been able to tell you that something bad was on the horizon.

Dolph’s final record was a sequel to that release, called Dum and Dummer 2. This is an obvious play on the sequel Dumb and Dumber To, which came out back in 2014.

The Society of Jesus is also known as The Jesuit Order.

Dum and Dummer 2 was released on March 26th:

The Jesuit Order‘s symbol is a Sun, with the Corona visible. The Sun’s corona in only truly visible during an Eclipse of the Sun.

This relationship is exhibited remarkably in gematria – note in particular the 69 and 33. 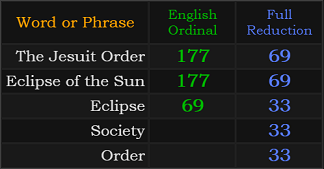 Young Dolph died on a date with Primary numerology of 69 and 33:

Friday will be exactly 69 months since the release of Young Dolph’s debut album.

In 2020, we had a Total Solar Eclipse I call the “Jesuit Eclipse”, because the point of Greatest Eclipse was directly over Argentina, where Francis is from. This was the same day the COVID-19 vaccines were first approved for emergency authorization.

The Jesuit Order was 444 years old when Dolph was born, and he died on the date leaving 44 days in the year.