My eyes were drawn to this story immediately by the 156 in the headline. This is a significant number to the Eclipse code.

This accident, which killed Tina Tintor, fell a span of 33 days before the next Total Solar Eclipse:

In July, I made this post which explained how the Raiders’ move to Las Vegas is a riddle connected to the death of Hunter S. Thompson. Thompson wrote Fear and Loathing in Las Vegas, and then committed suicide due to depression from lack of football.

His death was also connected to the Eclipse code.

The book Fear and Loathing by Hunter S. Thompson was published in ’72.

Henry has Primary birth numerology of 143, matching Fear and Loathing in Las Vegas:

In the list above, you see how Six six six and Triple sixes sum to 156. This is significant to the Eclipse code because the Earth’s polar axis is tilted 66.6° from the Plane of the Sun. Ruggs is a Third, meaning he has III or 999 after his name. 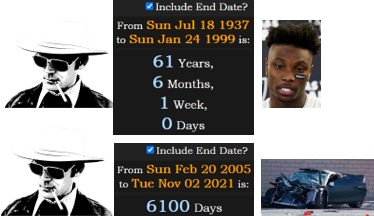 The new #1 wideout in Vegas will be number Thirteen Hunter Renfrow, who scored on his and his team’s 99th play of the game to win the 2017 National Championship.

The crash happened on the same date that the Braves won the World Series. They had not appeared in the Fall Classic since ’99.

The Raiders made that announcement on the 22nd day of 2020. Ruggs is currently 22 years old.

He was driving a 2020 Corvette. The woman who died was named Tina Tintor, whose initials are 20-20.

It’s probably noteworthy that the victim died along with her dog in the car. Hunter S. Thompson once wrote a famous exposé called “A Dog Took My Place” about the 1983 divorce case involving Herbert Pulitzer. Intriguingly, the article opens up by talking about the fast lane. Ruggs was driving over 150 MPH…