Michael was the son of award-winning broadcaster Ernie Johnson, who works for Turner Network Television. The station has matching 332 and 116 gematria with the disease that took his life, Duchenne Muscular Dystrophy.

TNT is headquartered in Atlanta, Georgia, one of the largest cities on the 33rd parallel. Not only does Ernie Johnson work there, but he also went to the University of Georgia.

“Coincidentally”, the Braves are currently playing in their first World Series of the millennium. Ernie Johnson’s father, Ernie Johnson Sr., was a major leaguer who played virtually his entire career with the Braves, winning a World Series while the team was in Milwaukee in 1957.

The news fell on a date with alternate numerology of 33:

33 is a number heavily-connected to the Lunar Eclipse code. It takes 33 solar years for the twelve-month lunar calendar to fall back in sync.

Donald Trump was born on same day as a Total Lunar Eclipse. The date was June 14th, written 14/6.

Prior to the announcement of Michael Johnson’s death, Donald Trump announced that we would be attending Game 4 of the World Series:

Trump, who was President #45, wore a hat with the #45 very conspicuously displayed on the side: 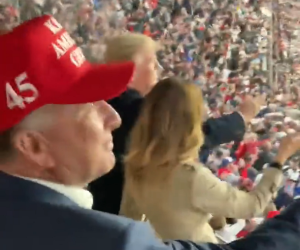 The starting pitcher for the Astros was Zack Greinke, whose real first name is actually Donald.