The other day, I did a little bit of reading up on Braves first baseman Freddie Freeman, who won the league’s MVP last season. I found a pretty strong riddle connecting to comic book character Captain Marvel Jr., whose real name is Freddy Freeman.

That’s why my jaw hit the floor when I saw this headline:

For the first time that I’ve ever heard of, a baseball player is wearing a Pearl necklace: 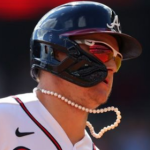 Joc Pederson was the Braves’ hero for the first three games of the Divisional Series against the Brewers. In the fourth game, Freddie Freeman hit a game-winning home run in the 8th inning that propelled the Braves to their series-clinching win:

Notice how Freeman wears #5 for the Braves. The comic book “superhero” Freddy Freeman first appeared in Whiz Comics #25 on December 12th, just 5 days after the Attack on Pearl Harbor:

Notice how the number 12 is just below the number 25. Captain Marvel Jr.’s full name is Frederick Christopher Freeman.

The first baseman’s full name has English gematria of 666.

666 is the Jewish value of the spelling used by Captain Marvel Jr., Freddy Freeman:

This syncs up with the Reduction gematria of Pearl Harbor.

Pearl Harbor has English gematria of 447.

Freddie the first baseman was born 17,447 days after Pearl Harbor (or 280 days after the anniversary):

Even though this is clearly a nod to the Pearl Harbor riddle, there’s something pretty unsettling about a guy walking around with a pearl necklace calling himself a “bad bitch”:

Freddie Freeman was born on 12/9, a date with Primary numerology of 129:

Freddie Freeman was born a span of 275 days after the anniversary of Freddy Freeman’s debut comic.