The lead actress on Sex and the City was Sarah Jessica Parker, the person whom most identify with the series.

Tomorrow, when many people will first see this story, will be a span of 182 days after her birthday.

The City actor was 57 years old

This is a number connected to the Moon, which has a 57° range of declination.

Sarah Jessica Parker has some wonderful gematria. Notice how the Jewish value of her name is 1214, like 12/14, the date of the most recent Total solar eclipse.

In Ordinal, Total solar eclipse sums to 202. This syncs up with Willie Garson’s birthday, which was February 20th, or 20/2.

William Garson Paszamant died on the 264th day of the year, which can be written as 21/9:

Garson’s death circulated the headlines a span of 9 months, 9 days (or 283 days) after the 12/14 Total solar eclipse:

The Sun is our Star. Sex and the City was created by Darren Star: 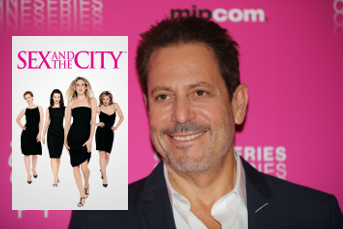 Willie died 15 weeks, 2 days after the anniversary of Sex and the City‘s first episode:

Garson died a span of exactly 211 months after the last episode of Sex and the City, on a day that also fell 211 days after that episode’s anniversary: 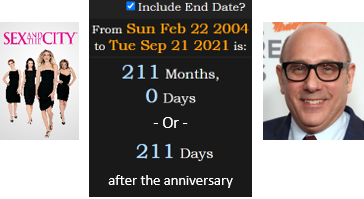 Recall that Willie was born on 20/2 and his name in Jewish sums to the 202nd Prime.

Sex and the City premiered on June 6th, the 157th day of the year:

His death fell on a date with numerology of 71 and 35:

The date leaves just one more day in the time of Virgo this year.

The Magic Square of the Moon, meanwhile, has a total sum of 3321.