In my last post, I explained how Milwaukee’s no-hitter last night had immense synchronicity connected to the 1989 film Major League. This all comes on the heels of the MLB game in Iowa at the new Field of Dreams stadium. Field of Dreams was also released in 1989.

The first 8 innings of the Brewers’ no-hitter were pitched by Milwaukee starter Corbin Burnes, who wears #39:

As my post showed, Burnes is connected to Charlie Sheen, who played closer Ricky Vaughn in Major League. Sheen was born on the 3rd of September, or 3/9:

As Milwaukee was completing their combined no-hitter, Evander Holyfield was set to get underway with Vitor Belfort:

Burnes threw his no-hitter in Cleveland, which has matching gematria with both Evander Holyfield and Belfort.

This syncs up with the name of the fight’s winner, Vitor Belfort. The name Corbin Burnes reminds us of Major League supporting actor Corbin Bernsen.

April 1st is the date that leaves 274 days in the year:

The Brewers extended a Major League record, throwing the Ninth no-hitter of the season.

Last night’s boxing match was notable for another bizarre reason – one of the commentators was Donald Trump.

The no-hitter gave the Brewers their 88th victory of the season.

Last night’s events occurred on September 11th, which can be written as 11/9. The name Donald sums to 119, a number that has been stamped on him regularly, even in TV commercials: 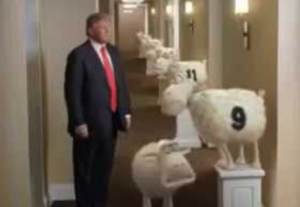 The no-hitter was thrown against the Indians.

Major League premiered on a date with Primary numerology of 119:

Consider how Charlie Sheen has gone on record questioning the 9/11 attacks. Charlie was born on the date leaving 119 days in the year:

September 11th can of course also be written as 9/11, which is an upside-down 116. On the date of the Brewers’ combined no-hitter, Josh Hader was 10019 days old, and Corbin Burnes was in his 1160th day in the Major Leagues: 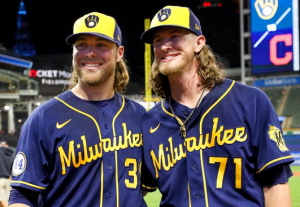 September 11th is the anniversary of the collapse of the 110-story World Trade Center complex, shaped like a giant 11, whose North tower had a 110-meter antenna. It was built by Rockefeller and brought down by Osama bin Laden on Nine one one.

There are 162 games in a Major League season.

Evander Holyfield and his opponent, Vitor Belfort, both have matching 162 gematria with Major League Baseball.

The day before Saturday’s baseball game and boxing match was 9/10, which falls 162 days after Vitor’s birthday. He was born on the 91st day of the year, a number connected to the Milwaukee Brewers:

His full name has matching 100 gematria with Milwaukee.

The name Belfort sums to 666, and his full name sums to 1666, similar to the Jewish value of Major League.

666 is a highly-significant number to The Moon. My last post mentions how this game was connected to the big “Revelation” Total lunar eclipse from May.