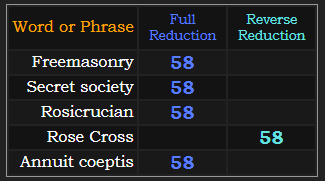 NASA was founded in the year ‘58. Since the inception of this blog, I’ve been writing about how NASA is synonymous with Freemasonry, a Secret society.

Apollo 1 was supposed to be the first manned test flight of the Apollo command module, which would ultimately be taken to the Moon.

The most significant cycle of the Moon is the Metonic cycle.

The Metonic cycle is credited to an astronomer named Meton of Athens.

The Challenger disaster occurred on January 28th, 1986, which was just one day after the Apollo 1 fire turned exactly one Metonic cycle old:

The number Nineteen has Jewish gematria of 244. Taking a man to the Moon was the goal of assassinated president John F. Kennedy.

In Ordinal, Nineteen sums to 86, which is the Reduction value of Cape Canaveral, Florida, the location of the launch complex.

The complex’s first launch was a Saturn I rocket on October 27th, 1961.

His name also has matching gematria with Freemasonry.

With the S Exception, Freemasonry sums to 67, the year of the incident.

Two of the astronauts, Ed White and Chaffee, have 34 gematria.

Gus’s G.G. initials remind us of the G in Freemasonry’s compass and square:

Fellow astronaut Roger B. Chaffee had birth numerology of 71 and 26:

He was born on a date with Primary numerology of 74 and 38:

These values are found in the word Masonic, which has a Jewish sum of 223.

The Moon’s Saros cycle is 223 lunar phases long. 223 is the value of Apollo in Primes.

The last names of the three astronauts sum to 314 in Reverse.

3.14 are the first three digits of Pi, which is integral to the Mathematics of the circle.

Apollo sums to 666 in the Fibonacci number.

666 is a very significant number connected to The Moon. With Full or Reduced number calculation, the launch site has matching gematria with 666 in Jewish.

2:56 was the time at which man allegedly first set foot on the Moon. We should also appreciate how Aldrin followed Armstrong 19 minutes later:

The number Ninety-five has the first four digits of Pi, 3.141, in Jewish gematria. Notice how the number also has overlap with both Astronaut and Moon.

The service tower at the launch complex for Apollo One was a height of 95 meters. The command module disaster occurred on a date with 95 numerology: