In my last post, I revealed the significant numerology of the Apollo 1 fire, which killed three astronauts in 1967.

Last December, I documented the alignments showing how the Gateway Arch in St. Louis, Missouri was constructed in 1967 as a tribute to the two Arch eclipses in 2021. It certainly appears as if these two events are related. Recall how the 19th Prime number is 67.

Consider first that the height and width of the Gateway Arch is 192 meters, which is the Jewish gematria of the world Eclipse:

The Apollo 1 blaze fell a span of 1 year, 92 days after Arch construction was completed and 19 weeks, 2 days before it opened to the public:

The fire was also a span of 19 years, 2 days before the Challenger disaster:

NASA achieved a Fake Moon landing via the Apollo missions.

This number is found in the Ordinal sums of St. Louis, Missouri, The Holy Royal Arch, and AS-204, the designation of the command module the three astronauts died in.

In the alphabetic order, The Royal Arch sums to 134.

The Apollo 1 disaster fell 134 days (or a span of 135) before the Gateway Arch opened to the public:

The fire was a span of 457 days after the Arch was completed, and 88 days before the next Total lunar eclipse:

The Hebrew value for Moon matches the English value for Death.

The date of the fire had alternate numerology of 77: 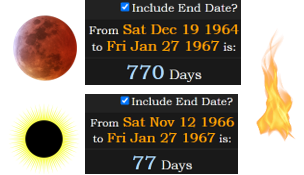