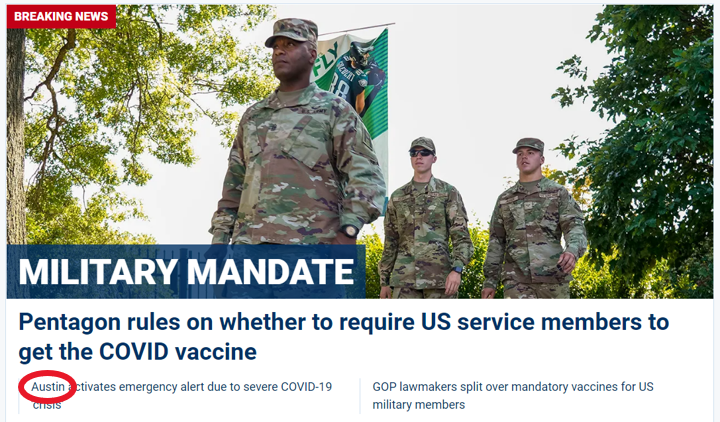 Last week, I made this post showing how the shooting near the Pentagon was a ritual connected to both the June shooting in Austin, Texas, and the Secretary of the US Department of Defense, Lloyd Austin.

Today, FOX News posted this headline regarding the military vaccine mandate. Notice how just below it, we’re being told that Austin, Texas has activated a COVID-19 emergency: 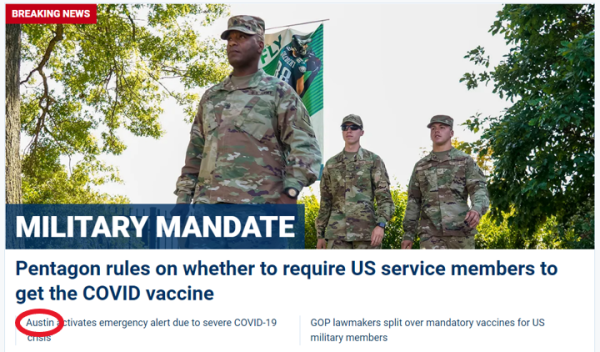 Of course, the government wasn’t going to tell everyone the vaccine was mandatory immediately – that might scare off too many people. But now that most adults have taken their jab, recipients are more likely to support the mandate since they would expect everyone to subject themselves to what they have already had injected.

As much as it pains me to say, most human beings really are pitiful people obsessed with their social standing, meaning they are too scared to speak up, even in defense of bodily autonomy. While many people I know were more than happy to be a big pharma guinea pig, most were reluctant to get it, because even to the average joe, something about COVID-19 doesn’t smell right.

Unfortunately, too many people are in love with the comforts in their life, and are unable to recognize a threat to their freedom that seeks to end them. In March of 2020 when the imaginary SARS-CoV-2 agenda was unleashed on the public, I immediately accepted that many of the things I enjoyed in life had come to an end. While the brainwashed around me cheerfully sat home, happy to do their part to “flatten the curve”, I became agitated and frustrated as I struggled to face my new reality.

We’re well over a year into the New World Order’s aggressive attack on the citizens of this planet, and I continue to miss some of those simple pleasures. I haven’t boarded an airplane in ~18 months since I choose not to be subjected to abuse by having my breathing blocked. I’ve missed out on a number of festivals that will undoubtedly be requiring vaccinations next year, and I continue to get angry looks when I go unmasked in a store full of zombies. But that’s all fine with me, because at least I stand for something. I’m not giving my freedom away to these lying globalist pieces of shit, no matter how much they take away, no matter how much they keep me from doing. I know what’s happening, and I will defend my right to expose their evil deeds with my life. I would expect the same from anyone reading this too.

So what’s the numerology of this story about the mandate? To that I say, who gives a fuck? The mandate is wrong. It’s time to take a stand against this.

One must give thought to whether or not the media has kept us abreast of the vaccine’s problems as an intentional method of causing more division among the public. Obviously, a large number of people will be very upset with this ruling. Are they implementing the mandate in hopes of a large number leaving the military, thus weakening us against a potential invasion from a foreign power? No “conspiracy theory” is off the table anymore.