Although Wright died on Monday, this news was not published until today, May 26th, written 5/26. He was best-known for playing the voice of the crab Sebastian in The Little Mermaid.

Sebastian the Crab sums to 57, just like Under the Sea, the famous song he sings from the film. This is a significant number of the Moon, which has a 57 degree range of declination. Today is the date of this year’s big total lunar eclipse.

Notice how the name Samuel Wright has overlap with both the Hebrew and English values of Eclipse, including the number 57.

69 is the astrological symbol for the sign Cancer, the only sign ruled by the Moon. Wright died of prostate cancer:

Cancer is the “crab” constellation:

Samuel Wright was the voice of the Crab in The Little Mermaid. 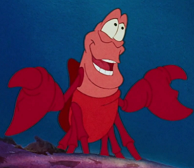 The crab’s name was Sebastian, which matches the Ordinal value of The Moon.

The most significant number of the Moon appears to be 666. Samuel Wright’s full name has matching Ordinal/Reverse gematria with that number.

The Moon is associated with water and the divine feminine. A mermaid is a mythical feminine character that lives underwater.

The number 187 is commonly recognized as the homicide code:

A couple of years ago on the date written 11/5 or 5/11, Shaggy performed the song “Under the Sea” live on ABC.