This reporter died on May 1st. One of Barack Obama’s crowning achievements as President, as hailed by the media, was the May 2nd, 2011 killing of Al-Qaeda leader Osama bin Laden. The date was still May 1st in the United States.

Damon Weaver died on the 121st day of the year:

The date Weaver died had a Life Lesson number of 11:

Osama also died on a date with a Life Lesson number of 11:

The 9/11 attacks blamed on bin Laden, which were on the 11th day of the month, occurred at the 110-story World Trade Center. The first plane to strike was American Airlines (A.A. = 1-1) Flight 11. Two two towers formed the number 11 in the skyline: 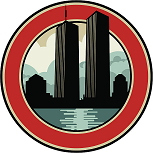