58 is a key number to this story. New Jack was recently featured as the topic of an episode of Dark Side of the Ring called “The Life and Crimes of New Jack.”

I’ve done several posts about the deaths of wrestlers featured in this TV show in the past. See my work on Brian Pillman, Josephus, and Animal.

New Jack, whose real name is Jerome Young, died 58 weeks after the episode about him aired:

He died on Israel’s anniversary. Israel has the Star of David on its flag. This is also the birthday of Facebook founder Mark Zuckerberg.

He got his name from the movie New Jack City.

New Jack died 67 days after the anniversary of the release of New Jack City:

New Jack died of a Heart attack in Greensboro 409 days after its debut:

New Jack’s last day alive was 13 months, 13 days after he was featured on Dark Side of the Ring. 13 is a Star number. The next two are 37 and 73. On the date New Jack died, Mark Zuckerberg turned 37 years old and Israel turned 73: 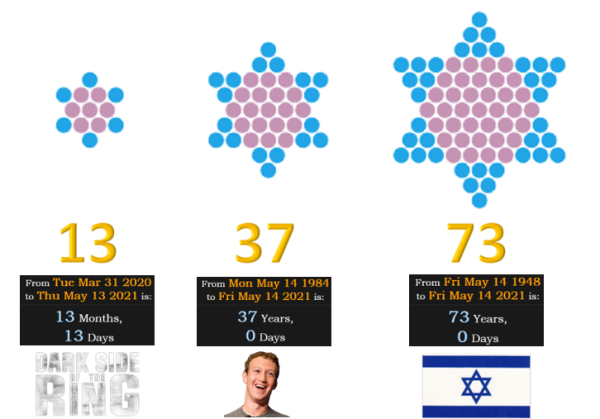 13 is also very significant to the Moon, which has 13 lunar phases every couple of years. The consonants M and N are both 13 in Ordinal / Reverse, and The Moon has matching gematria with Thirteen.

New Jack was best-known for his time in ECW.

Including the end date, New Jack died 410 days after the episode with his name:

New Jack was a pretty unique wrestler, to say the least. During his tenure in ECW, he used the song Natural Born Killaz as his entrance theme.

His theme was a little more important to him than other wrestlers. In the last few years of New Jack’s time in ECW, the song would simply play on loop for 10-15 minutes while Jack beat the hell out of his opponent with a trash can full of weapons. This gimmick was so celebrated, ECW even named a pay-per-view event after it.

Jerome Young died a span of 148 days after the anniversary of the song’s release:

The song was made by Dr. Dre and Ice Cube. This is the Reverse value of Ice Cube’s real name.

The name Jackson stands out because both Dr. Dre’s and New Jack’s real last name is Young. Back in March, I made this post connecting the death of actor Craig Grant to rappers Curtis Jackson (50 Cent) and Young Buck.

I even made this post connecting Grant’s death to pro wrestling.

New Jack died on Israel’s 73rd birthday. This reminds us of the Hebrew deity EL (Saturn), which is 73 upside-down.

The name Jerome sums to 33.

Measuring from the ECW event named “Natural Born Killaz” to the date of Jerome “New Jack” Young‘s death was a span of exactly 1290 weeks:

Towards the end of 1996, New Jack was involved in the infamous Mass Transit incident, where he basically mutilated an amateur wrestler in the ring while high on cocaine (as he usually was). The incident grew even darker when Erich Kulas, his opponent, died in 2002 from an apparently unrelated surgery.

New Jack died on the date leaving 231 days in the year:

I literally just watched the New Jack episode of Dark Side of the Ring five days before he died: