The nickname of former VP Walter Mondale was Fritz.

He passed away yesterday, a date with 64 and 28 numerology. Notice how every number in this date appears in the gematria of Kill:

April 19th leaves 256 days in the year.  Walter Mondale was the Vice President to Jimmy Carter:

Man first stepped foot on the lunar surface at 2:56 UTC. More on this below.

Mondale dead on a Monday…news of his passing made headlines by the morning of April 20th, or 4/20.

With Mondale’s nickname “Fritz” included, we find he has matching gematria with Freemasonry:

Walter was even married to a woman named Joan.

Walter’s nickname sums to 181 in Reverse.

Walter Mondale was the Democratic nominee in the 1984 Presidential Election, where he got slaughtered by incumbent Ronald Reagan.

Mondale died a span of 93 days after Jones’ birthday at the age of 93. in his home state of Minnesota:

Walter was a Capricorn, ruled by Saturn.

Minnesota has been a key ingredient to the New World Order’s push towards a new society. The staged death of masonic actor George Floyd occurred in Minnesota last year, sparking a number of riots. Recently, Daunte Wright, who just happened to know Floyd’s girlfriend (if you’re REALLY gullible), was also killed by police, inciting another round.

The key number to the George Floyd ritual is also the primary number to Minneapolis, Minnesota – 93. 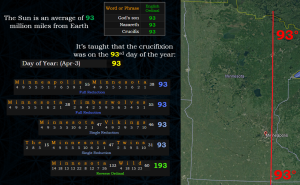 Mondale’s name w/ nickname included has familiar numbers to the Moon landing. He died on a very significant date for NASA.

The Freemasonic compass is set to 47 degrees: