Ponzi would later reduce his returns to 45 days.

Madoff’s sons first alerted authorities about his Ponzi scheme on December 10th, the date written 12/10. Recall how 12/1 was the date in 2019 when COVID-19, a Revelation riddle, was first allegedly diagnosed in Wuhan, China.

Revelation is an Apocalyptic tale about the second coming.

Madoff was famous for running the world’s largest Ponzi scheme.

I very frequently discuss the significance of the number 1331 in relation to the eclipse code. The numbers 133 and 331 can be merged to create 1331 – this works in gematria too.

News of Bernie’s death was made public early in the morning, so it’s possible he died last night.

The first date listed on Bernie’s Wiki page is November 30th, which was the date on the statement prosecutors used to estimate the fraud:

Charles Ponzi came up with his scheme in 1919 and started his company in 1920.

There’s only one other number to have Jewish gematria of 1331.

393 is the Reverse value of his company’s name.

The Metonic cycle is 19 years in length. Because of this, there is often a Solar eclipse exactly 19 years after a previous one. 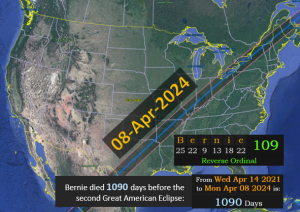 Bernard Madoff even has matching gematria with Nineteen.

Notice the date of that second eclipse – April 8th, or 4/8. That’s the birthday of Andrew Madoff, Bernie’s other son, who died at the age of 48 from lymphoma in 2014. Madoff plead guilty to his Ponzi scheme 48 days before his birthday.

The Latin name for the Moon is Luna.

The Moon has a 57°range of declination.

Bernie Madoff had Primary birth numerology of 90 and 36:

The most famous person named Bernie is probably Bernie Sanders. According to this list, he is.

I guess you could say it’s closer to 239,000 miles. But that’s the gematria of Madoff’s company: