This post will detail how Ken Jennings‘ record-shattering 2004 Jeopardy! winning streak was connected to the 2004 World Series, won by Boston, and the astrological code of solar eclipses.

Boston’s World Series victory ended the Curse of the Bambino. The “Bambino” was the nickname of Babe Ruth, who was traded from the Red Sox to the Yankees.

2004 was the Red Sox’ first appearance in the Fall Classic since ‘86, and ended an 86-year championship drought.

The story of Jesus Christ begins in the 930th chapter of the Bible, where the first man (Adam) lived to be 930 years old. “Christianity” = 930. The Catholic church teaches that the crucifixion was on April 3rd, the 93rd day of the year, between 9 am and 3 pm. It was the death of the son of God – the Earth’s sun is an average of 93 million miles from Earth. Babe Ruth‘s real name sums to 93:

This number is in the Reduction value of Kenneth Wayne Jennings, along with 303.

Jennings’ Wikipedia photo is still from 2007, the year he turned 33: 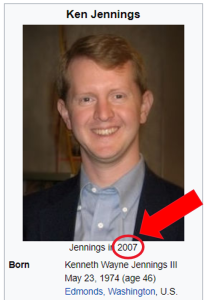 It’s also taught that the Crucifixion of Jesus Christ occurred at age 33, in 33 A.D., on the date of a lunar eclipse.

I consider this to be the most significant four-digit eclipse number. The verse of Revelation that describes both a solar and lunar eclipse sums to 1331.

The 1331 total solar eclipse, which fell on November thirtieth, had a path of totality that never touched a major body of water. It occurred the same year that the Black Death plague began in China.

This year, on 12/2/2021, we learned about the alleged death of Brayden Smith, whose death also contained a significant eclipse riddle.

The Red Sox pitcher who earned the win in Game 4 to clinch the World Series was Derek Lowe. The losing pitcher, Jason Marquis, was 237 days before his birthday.

In Ordinal, Jesus sums to 74, along with a group of other relevant words.

The question that Jennings’ streak ended on contained only the numbers 7 and 4: 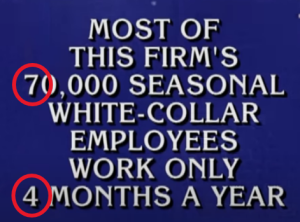 Jennings had his 74-game winning streak snapped during his 75th game:

Their World Series victory fell exactly 74 weeks before the next total solar eclipse:

They defeated St. Louis in the World Series. That year, St. Louis had an outfielder named Edmonds who won the Silver Slugger Award. Ken Jennings was born in Edmonds, Washington.

Their World Series win happened when Jennings was 11115 days old. When his streak ended the following month, he was a span of 11150 days old:

Beginning of the Streak

Babe Ruth was born on February 6th, written 2/6 or 6/2. He died on a date with numerology of 26 and 62. The Red Sox won the World Series with the franchise’s 62nd postseason victory. Ken Jennings’ first appearance was on June 2nd, written 6/2 or 2/6.

The winning pitcher was 31-year-old Derek Lowe, who was exactly 31 weeks before his birthday:

Lowe’s 31st birthday that year fell on a date with Primary numerology of 31:

Ken Jennings was born on a date with Reduced numerology of 31:

Babe Ruth had a Life Lesson number of 31:

His winning streak ended on the date leaving 31 days in the year:

On that same day, the Boston Red Sox played against the Anaheim Angels. Winning pitcher Ramon Ortiz shares a May 23rd birthday with Ken Jennings.

Both the Red Sox and Angels entered the game with 31 wins, with each team vying for its 32nd. Boston reliever Mike Timlin, whose birthday is 3/10, took the loss, dropping his season record from 3-1 to 3-2.

That date had Primary numerology of 32, which was also the 154th day of a leap year:

In their 53rd game, the Boston Red Sox lost 7-10 to the Anaheim Angels.

Notice how both teams have the number 10 in the scoreline. They combined for 27 hits – the Red Sox would go on to win the World Series on 10/27.

End of the Streak

The Red Sox won the World Series on the date leaving 65 days in the year:

The winning streak ended on a date with Primary numerology of 65:

When Kenny was finally defeated, the answer he failed to get in Final Jeopardy! was H&R Block.

The Curse of the Bambino began when Babe Ruth was traded in 1920. In Latin/Jewish, the word eclipse sums to 192.

The first day of his winning streak fell 192 days after the 2003 total solar eclipse:

Just for good measure…that same date, June 2nd, was a span of 666 days before the next total solar eclipse:

Ruth’s full name has perfect overlap with 666 in the base ciphers:

World Series winning pitcher Derek Lowe was born on a date with 99 numerology:

Derek Lowe‘s World Series victory was the 413th appearance of his career (including playoffs).