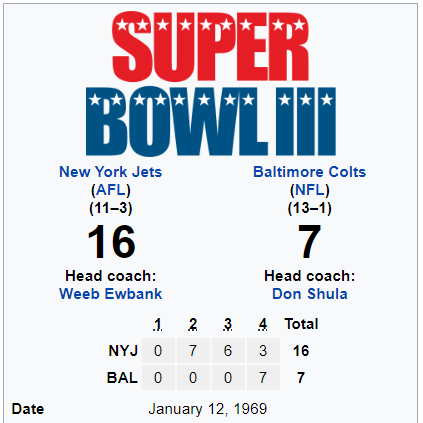 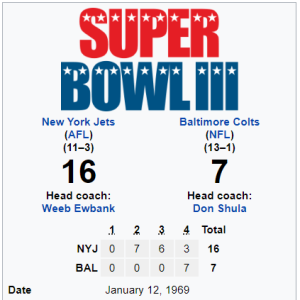 New York is the Empire state. Its first governor, George Clinton, was born in the year ’39.

It was a date with Primary numerology of 37:

Weeb Ewbank passed away at the age of 91.

Although this was the third Super Bowl, this was the first game to actually be called the “Super Bowl” in the time leading up to the game. The first two games were played as the “AFL-NFL Championship Game” and were only called Super Bowl I and II retroactively.

Super Bowl III was the championship for the ’68 AFL-NFL season. ’68 was the same year that construction began on the first of two World Trade Center buildings in New York. Construction on the second tower began in January of 1969, the same month as Super Bowl III.

33 years after ’68, the World Trade Center was brought down by two jets. Super Bowl III was won by the New York Jets. The Jets were led by their quarterback, Joe Namath, who famously guaranteed an upset victory in the weeks leading up to the game.

The Jets defeated the heavily-favored Baltimore Colts, who were led by quarterback Johnny Unitas, who died on the first anniversary of the September 11th attacks.

In the United States, where the 9/11 attacks occurred, 9-1-1 was first used as the emergency dialing code in the year ’68.

In most parts of the world, the emergency dialing code is 1-1-2. Super Bowl III was played on 1/12, and was the first game to be called the “Super Bowl“.

That film features a man stopping at a Hilton hotel on his way to the black monolith on the Moon. The nearest building to the twin towers was a Hilton hotel in the same shape as the monolith.

And of course, George W. Bush, who was president during the 9/11 attacks, graduated Yale University in ’68.

See my full presentation on the numerology of 9/11, which contains an in-depth explanation of how it is related to the Book of Revelation. There are 404 verses in Revelation, and Super Bowl III was a span of exactly 404 months before 9/11: