As a lifelong fan of the Milwaukee Brewers, the Steve Bartman incident from 2003 brought me tremendous joy back when I was a mere 18 years of age. I was fortunate enough to watch the entire game on TV live, and I made sure to re-live the moment many times over.

Here’s what you need to know about the play: In 2003, the Cubs had gone 95 years without winning a championship, and hadn’t even played in a World Series in 58 years. They had taken a 3 games to 2 lead in the National League Championship Series over the Florida Marlins, and led Game 6 by a score of 3-0 in the 8th inning, just 5 outs away from wrapping the series up.

With one out in the top of the 8th and a man on base, Luis Castillo had worked pitcher Mark Prior to a 3-2 count. Castillo kept the count full with several foul balls, one of which appeared to be catchable by left fielder Moises Alou. However, a Cubs fan, caught up in the moment, foolishly reached out and prevented Alou from being able to catch the ball: 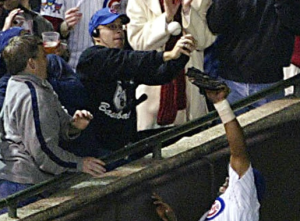 The interference certainly appeared to prevent the Cubs from securing the second out of the inning, and Alou was adamant that he would have caught the ball. Instead, the Marlins immediately rallied – Castillo walked on the very next pitch. The next hitter, Ivan Rodriguez, roped a 0-2 base hit to left, scoring the Marlins’ first run. Miguel Cabrera and Derrek Lee both attacked the first pitches they saw, resulting in an Error and a Double, respectively, and just like that, the Cubs’ lead had evaporated.

Starting pitcher Mark Prior was pulled, but it only got worse. The Marlins would score 5 more runs in the inning, taking an 8-3 lead that they held until the end of the game. The Marlins made another comeback in Game 7, and what looked to be a World Series season for the Cubs ended in pain and suffering.

In retrospect, this event was heavily-coded by the numbers. Before we look at the numerology, I want to point out how the 1985 film Back to the Future showed the Cubs winning the World Series in 2015, just one year before they actually did.

In the movie, they defeat a team from Miami, even though there was no baseball team in Miami at the time. The Bartman game was against the Florida Marlins, who play their home games in Miami. They even changed their name to the Miami Marlins just in time for the 2015 season.

Chicago, Chicago, Illinois, and Chicago Cubs all have 91 gematria.

The intersection of the two Great American Total Solar Eclipses is in the state of Illinois:

The two eclipses occur on the 233rd and 99th days of the year:

Illinois has matching 99 gematria with Thirteen in the base methods. The Cubs’ home field, Wrigley Field, shares some of these numbers too:

Notice the value of 45 in Reduction. Cubs sums to 45 in Ordinal. Prior to winning the 2016 Championship, the Cubs had not made the World Series since ’45.

The Bartman incident was 13 years before the Cubs finally won the World Series. They would eventually lose the series against the Marlins.

The Marlins play their home games in Miami, which also has matching gematria with 13:

Wrigley Field is known as The Friendly Confines. Their drought was called the Curse of the Billy Goat. It ended in 2016 when the Cubs won 103 games during the regular season.

Note the 140 value in Reverse. This is the Ordinal gematria of Steve Bartman.

The winning pitcher for the Marlins, Chad Fox, was 41 days after his birthday and a span of 10 months, 3 weeks before his next:

Ironically, Chad Fox would go on to finish his career with the Chicago Cubs.

The game was 13 years, 311 days before the first Great American Eclipse, and a span of exactly 13 years, 3 weeks before the Cubs won the World Series on 11/3.

Steve Bartman was in Seat 113. The Bartman ball was Mark Prior’s 113th pitch of the game.

Mark Prior ended up throwing six more pitches, bringing his total to 119 for the game before he was pulled.

In Hebrew gematria, the word Moon sums to 218.

218 is also the Ordinal value of Steve Bartman incident.