In July of 2018, I made this post, highlighting the bizarre numerical and symbolic relationship between politician Kamala Harris and the pro wrestler Kamala, whose last name also happens to be Harris. James Harris was from Senatobia, while Kamala Harris is a Senator.

It’s been a little over two years, and now the wrestler Kamala has succumbed to his failing health. He celebrated his final birthday on a date with Primary numerology of 73:

He died 73 days after his birthday:

How strange is it that the media is circulating this photo of the wrestler Kamala wearing a “Kamala For President 2020” shirt, given Kamala Harris’s recent surge towards a potential spot as Vice President? 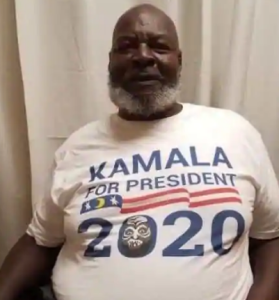 86 is of course a term for offing or getting rid of.

This seems to be an important number for me. My first YouTube channel was deleted on 2/22 in 2018. My website was taken offline for a copyright claim involving the Sandy Hook shooting 222 days after my birthday and 2220 days after Sandy Hook.

In my original post, I pointed out how James Harris has matching gematria with total solar eclipse.

#RIPKamala was trending on Twitter following news of his death.

Strange that Kamala Harris posted a Tweet that repeatedly mentioned the number 87 just one day before James died:

The number twelve also has gematria of 87.

In Reduction, James has the same 12 gematria as Kamala.

Kamala’s final birthday was on the 149th day of a leap year:

My Own Baptism – By the Numbers
11 Dead, 10 Injured in Czech Apartment Fire